A thumb or a lake? Clear choices.

Last Sunday I landed in Yosemite - Tuolomne Meadows, specifically, which is high country Yosemite, for those who haven't visited.  Camping in the forest on the banks of a snowmelt river, at 9,000 ft elevation.  Stunning.  Also, Home, as I have spent more of my vacations in Tuolomne than in any other spot on earth.  I brought one family of my own, consisting of the Physicist, Kid 1 (age 9), Kid 2 (age 4), assorted other family members, and one of my oldest friends, who is a wildlife professor, so we will call her WP, with her son, Kid 3 (also age 4).

Since Hiking involved two 4 year olds, we chose an easy destination.  Lake Elizabeth: a crystal clear high alpine lake in a sunny meadow, under the watch of Unicorn Peak. There's a ridiculously postcard perfect babbling brook, ridiculously full of brook trout. Only 900 feet of elevation gain, only 3 miles in and another 3 out.  Downhill all the way out.  Perfect.

Or as perfect as a hike can get with 3 kids, of assorted levels of competency and whinge.  While the trail is perfectly suited for those competent, unaccompanied adults who like to get in a good quick 6 miles before breakfast, we planned to do it up right for the preschool set, and take all day.  There were snacks for each mile marker.  There was a huge picnic lunch packed.  There were small wetsuits and goggles and towels and changes of shoes.

The weather was perfect. The park was uncrowded, the trail uncluttered.  We climbed a mile and 400 feet.  We ate yogurt.  We crossed creeks.  We egged people forward.  We carried nobody.  We searched for Nogs (a highly mischievous version of goblins; they live in hollow trees).  We roared like bears.  We took breaks.  We collected pebbles.  We found walking sticks. We climbed a second mile, and 300 more feet.  We earned chocolate.

So at Mile 2, with 3 kids perched above my head on a granite boulder, looking on as I unwrapped the Toblerone, it was a bummer that said Toblerone was no longer in perfect, breakable, even sized chunks.  I sighed, and got out the knife.  It's a good knife for camping, a very sharp hunting knife, 4 inch blade, comes in a leather sheath so it doesn't stab anyone through the backpack.

I chopped off a small piece.  No good.  Gave it to the physicist.  Chopped off two good pieces fairly easily.  Needed just one more piece the same size, and my trolls would be happy.  Difficult task, that: the next bit was very chunky and large. I set the knife against the chocolate, on a cutting board made of a good sized chunk of granite by the trail.  I chopped off my thumb.


Not the whole thumb.  We're glad about that.  Not even any bone.  But I looked down at the chocolate and there was clearly a chunk of my thumb sitting on the rock, right next to it.  And then, because one really has no choice at that point, I looked at my thumb.  It would probably have been better had I not.  One really doesn't need to know what the inside of one's appendages looks like.

As it turns out, between the Physicist, the WP, and me, the only one trained in wilderness first aid, unfortunately, was the one missing a chunk of itself.  It quickly became clear - as P and WP dug in their packs and offered me (1) wet wipes and (2) Kleenex and (3) Tylenol,  for a chopped off hunk of fingernail and flesh - that if someone was going to keep me from (1) fainting and (2) going into shock while (3) applying appropriate first aid, that person was going to have to be me.  Which was a shame, because options 1 and 2 were immediately appealing.

As it turned out, in the packing of picnics, snacks, wetsuits and spare shoes, we had not managed to pack a first aid kit, and neither kleenex nor wet wipes are remotely appropriate for stopping bleeding, or for bandaging that particular size and type of wound.  Eventually a lens cloth from the sunglass case became a pad, and strips cut with a hunting knife, a la the best period romances, from my husband's shirt, became a bandage.

Then we gave the kids their chocolate.  They'd been getting impatient.  Then I had some Tylenol.  In case it started to hurt.  I had a feeling it might, once the adrenaline kicked down.  Then some chocolate, to prevent shock.  Blood sugar seemed a good idea.  And then we hiked to the lake.

Oh come on.  You would have, too.  I was two miles from a first aid kit, in rough country, and I had to get the bleeding stopped now - I didn't have time to let it bleed all the way back down the mountain.  So there was no way I was going to be able to get to a proper bandage before the wound clotted.  And once it's clotted, I'm stable, and once I'm stable, I'm stable.  Thirty minutes vs a few hours makes no difference at that point.

You can't hike a couple of preschoolers that far and that steep, and then turn them around and hike them back to camp without giving them their promised lake-and-picnic.  We only had another mile and 200 feet to go - we were practically there.

I hiked ahead, applying pressure all the way, because wrangling Kids 2 and 3 was a bit beyond my stability level at that point.  Kid 1 hiked with me, which was useful in case I fainted after all.   I didn't faint.  I even got the bleeding stopped, though the rest of the Physicist's shirt eventually had to be sacrificed to make a sling. To stop persistent blood loss in the high country: immobilize and elevate wounds above heart level.  Just a useful tip. 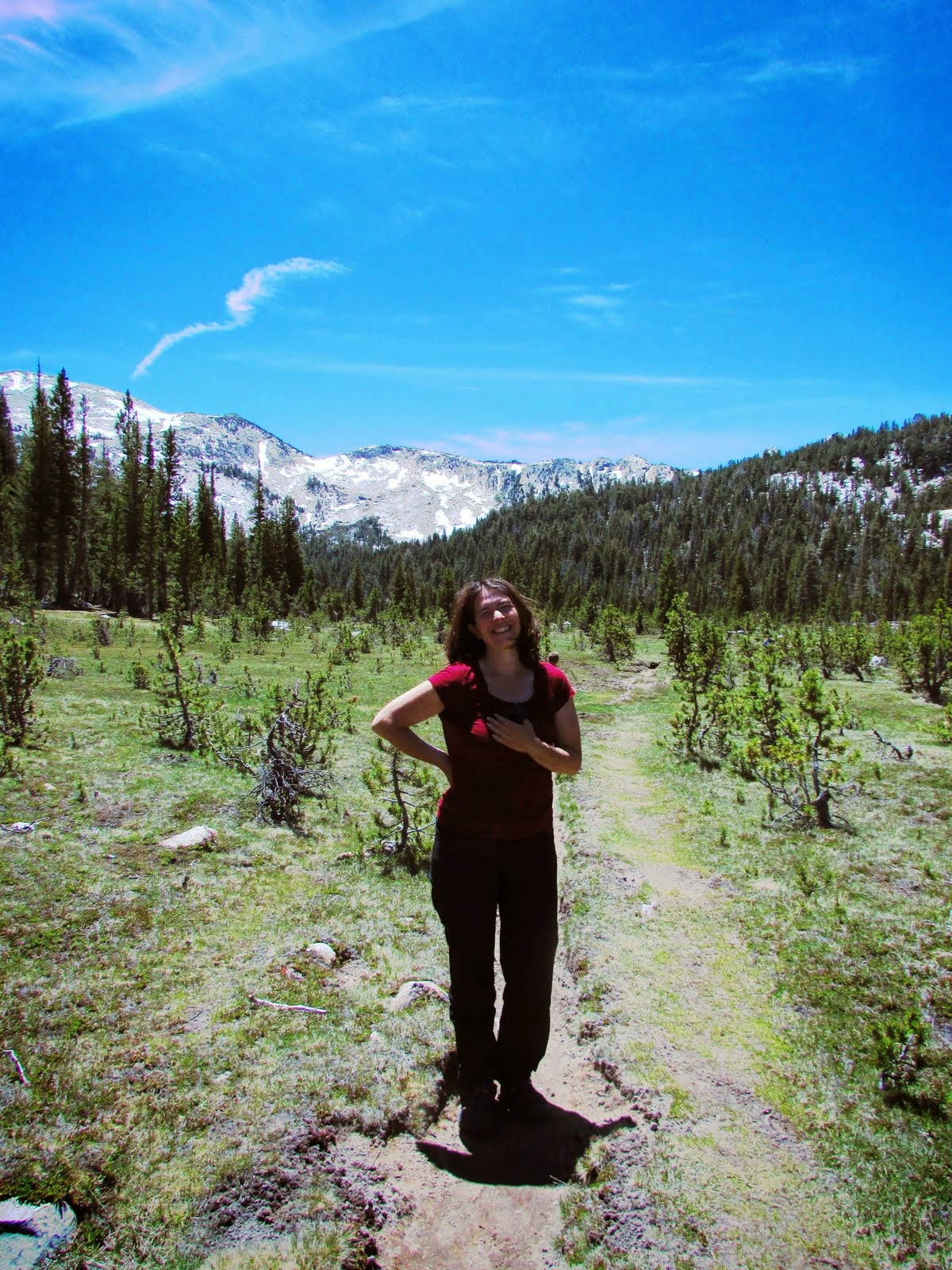 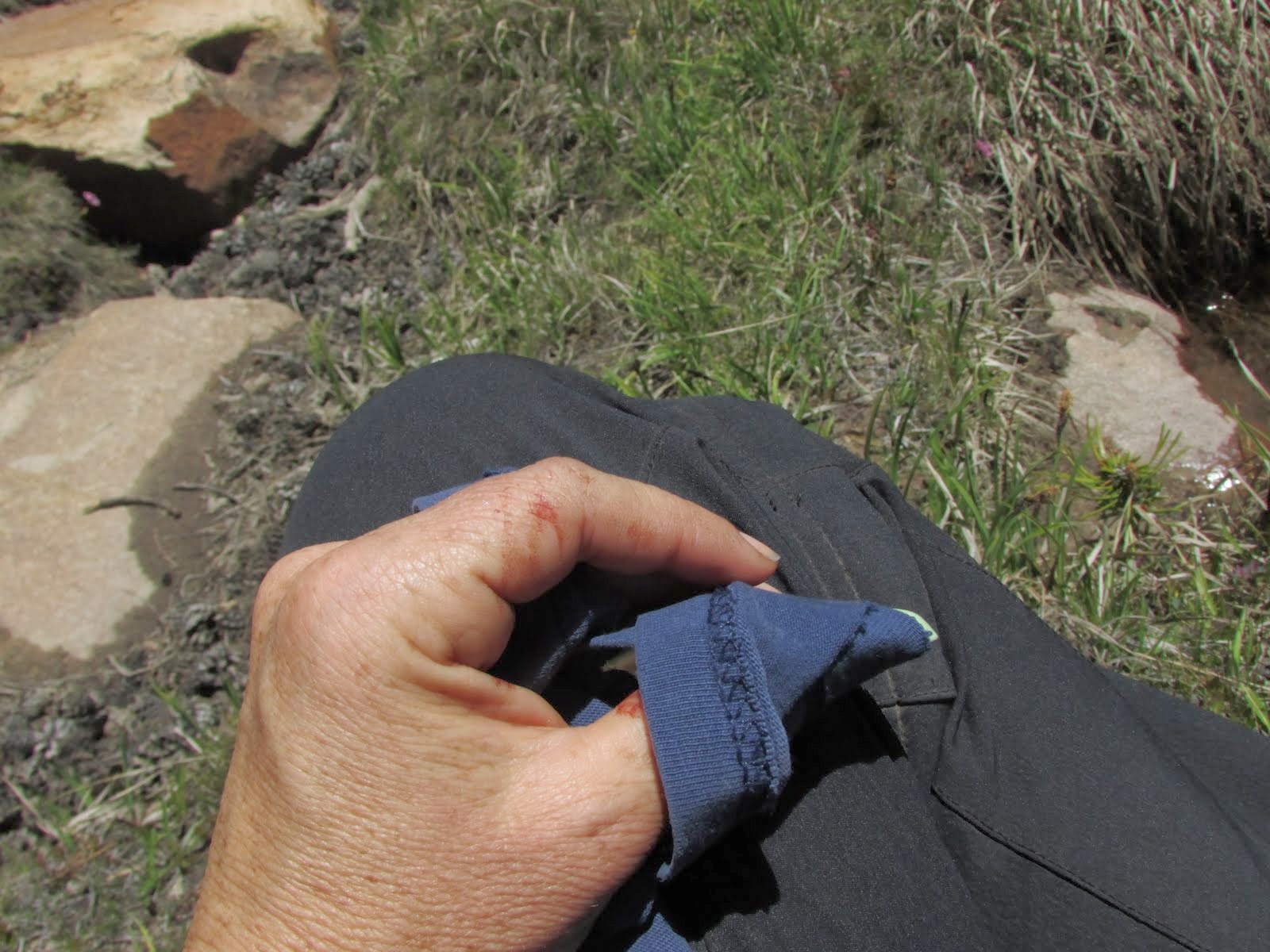 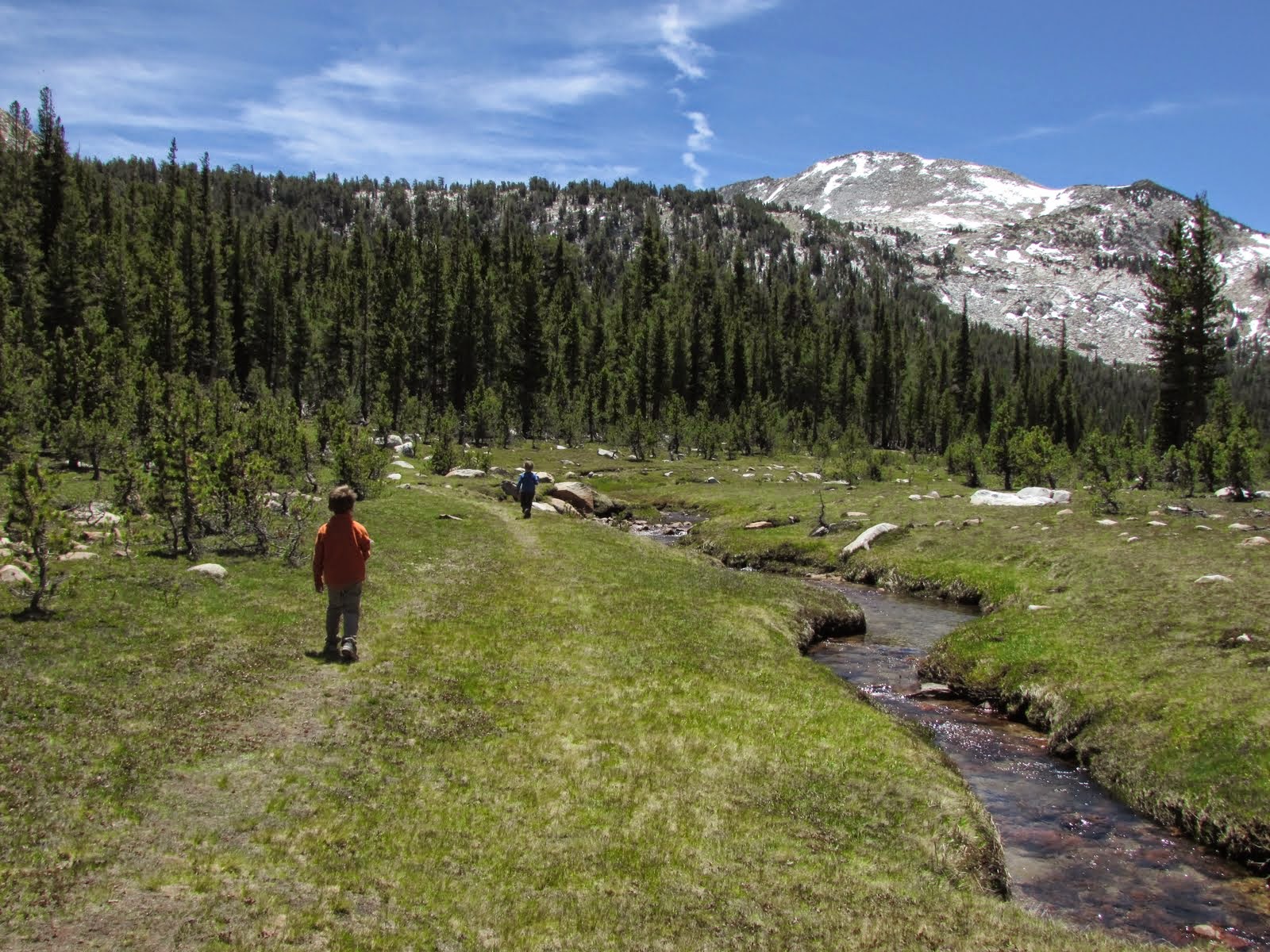 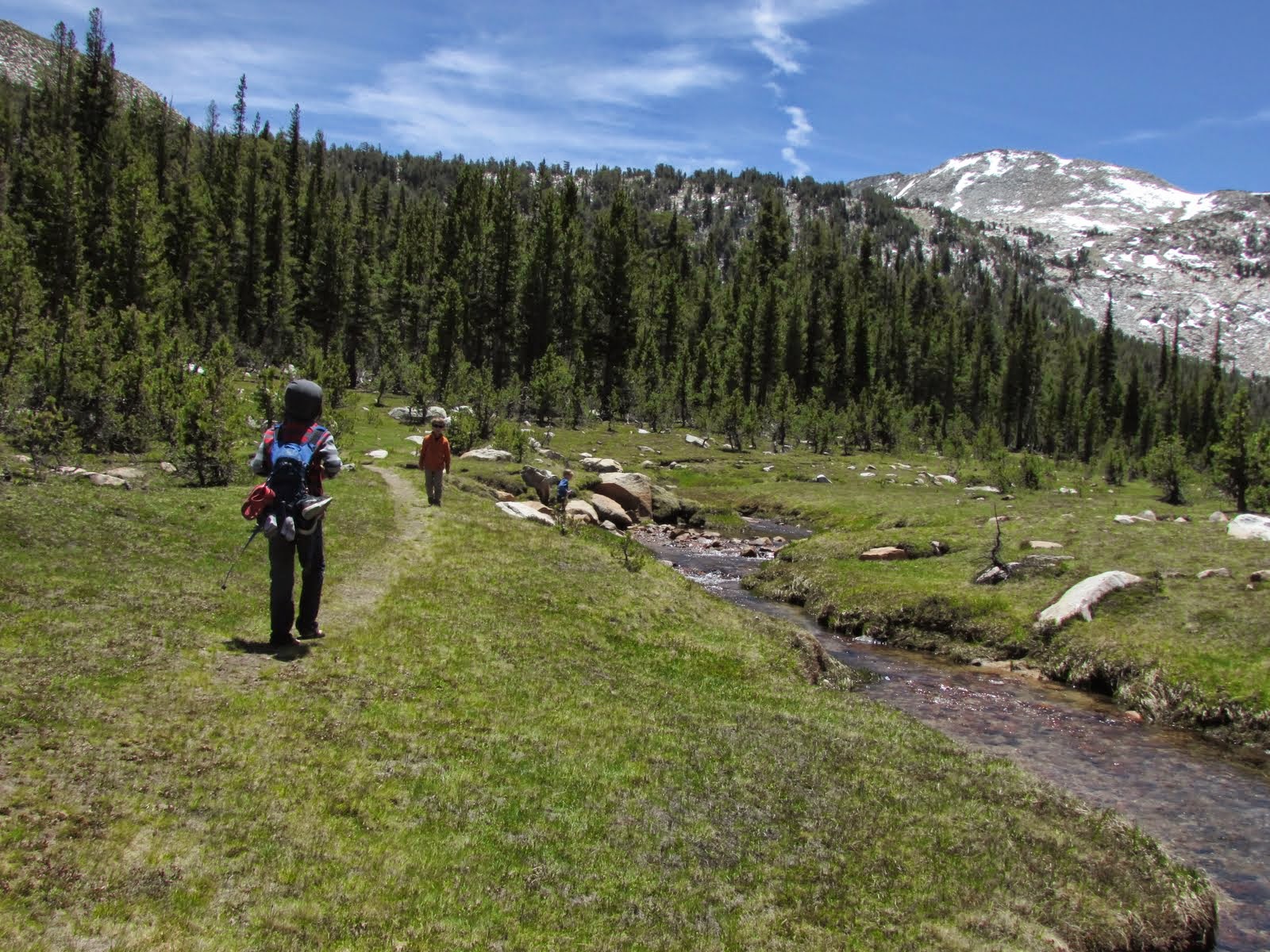 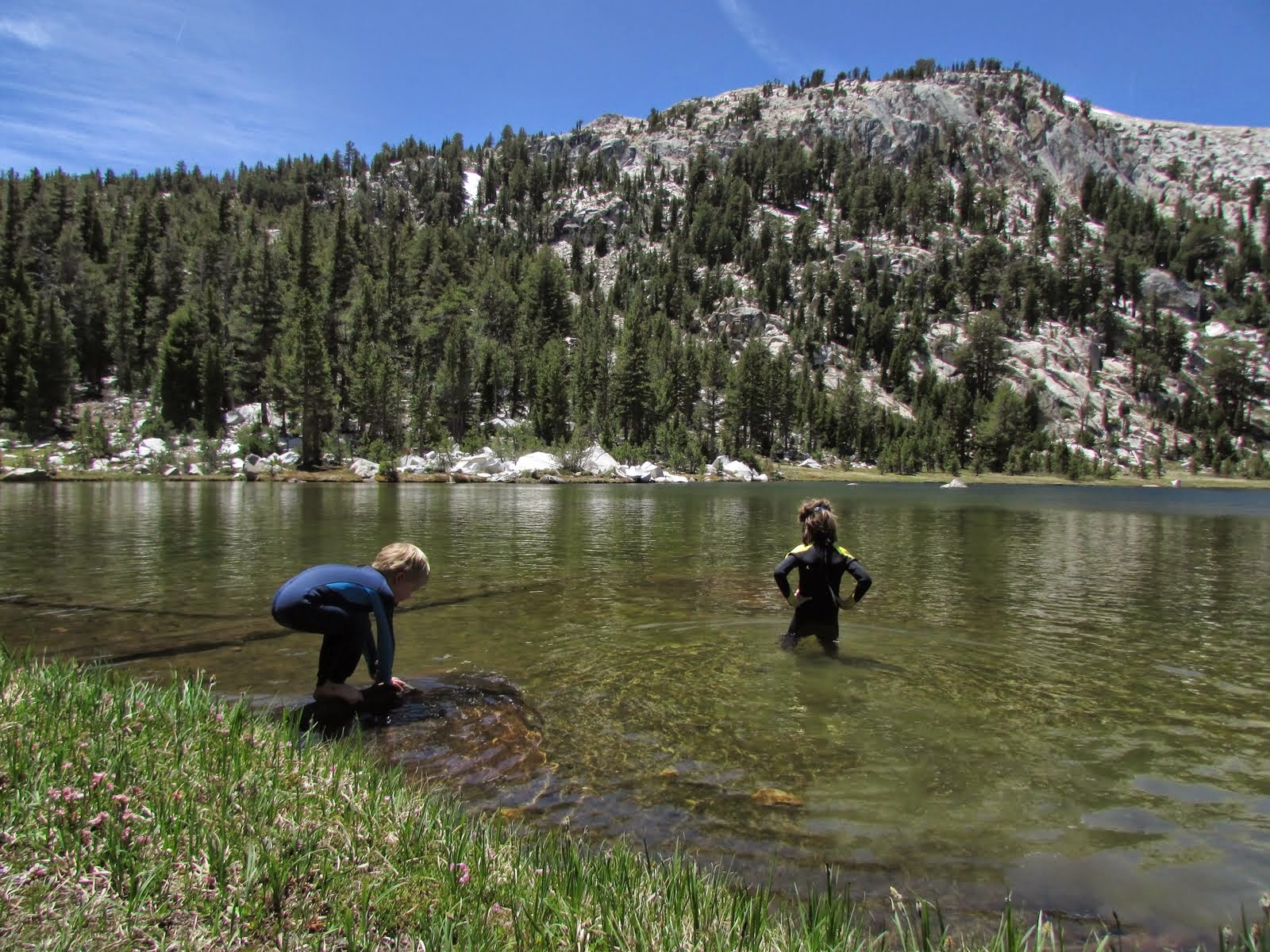 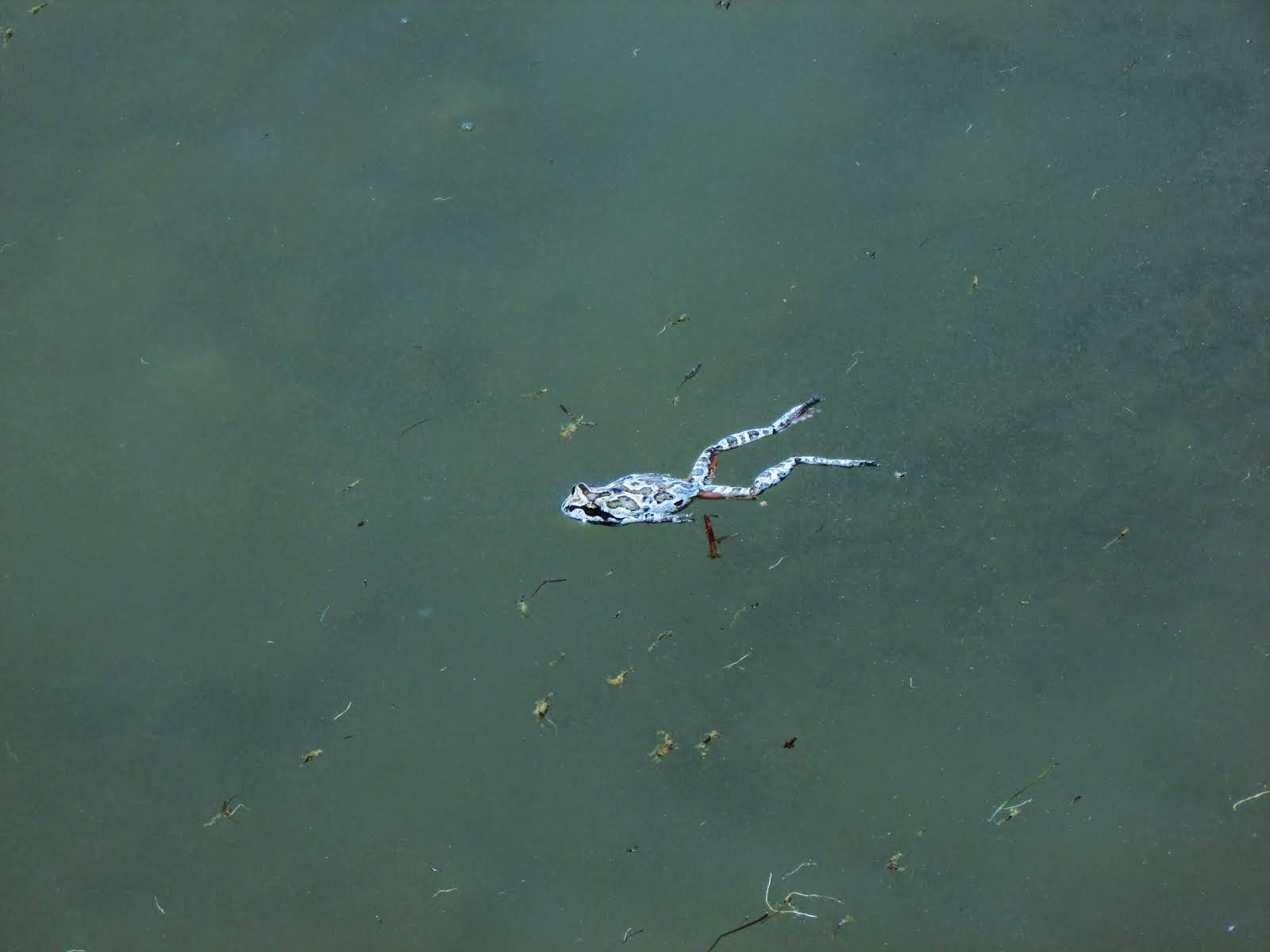 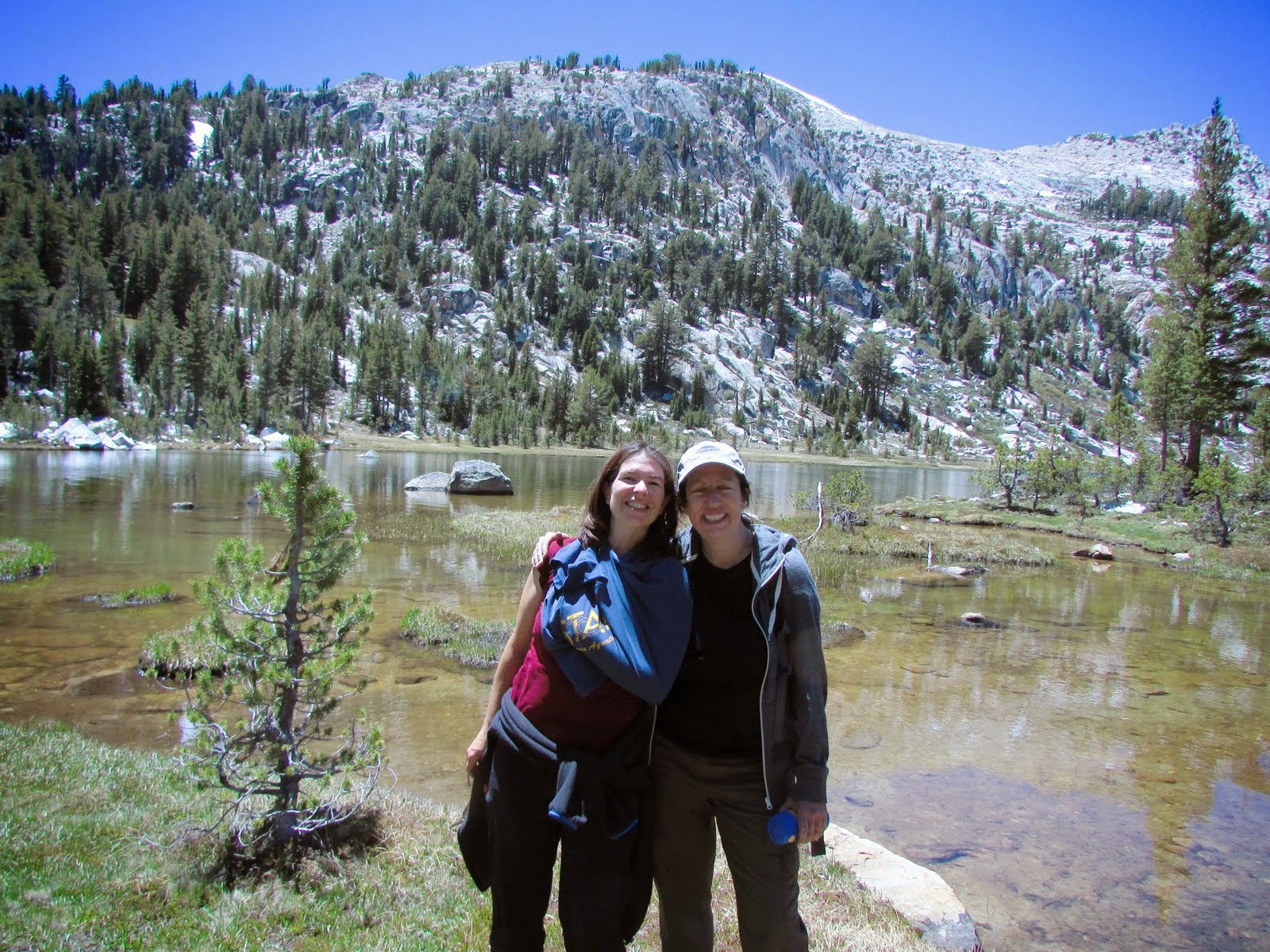 I did find a ranger, three hours later, so as to request professional bandaging.  And he did send me to a hospital, where they bandaged me properly while telling me every finger-chopping story they'd ever tended.  And now I'm home, and someday the giant white gauze will come off, and I'll have a thumb again.  Significantly smaller than the original.

But my kids hiked to Lake Elizabeth, and caught a frog, and lost a shoe, and found brook trout, and swam in a clear mountain lake at 10,000 ft under the shadow of Unicorn Peak.  And that memory won't get smaller than the original.  Probably, quite the reverse.
Posted by Rebecca at 7:56 AM