Playing catch up. Families of finches.

I wrote this weeks ago, April 28th, in fact, and never got around to posting it.  Since I can't update on stories until I've told them in the first place, and I just spent an hour giving myself a stiff neck attempting to photograph updates, I ought to post it, yes?

Little story.  A house finch tried to build a nest on a beam above my mom's front door.  But we think it was a first year mom, 'cause the nest kept falling down.  So my mom, in a spirit of helpfulness, made a bowl from a plastic plant pot and stuck it up there with double sided tape.  Whereupon the finch built a nest in the bowl.  But the tape didn't stick.  So my mom kept making the Physicist climb a ladder to shove the nest back centered on the beam so it wouldn't fall off.  Bad arrangement.

Saturday I saw the mom feeding three very loud babies, and the darn nest was shoving off the edge again.  At which point one can't really mess with the nest - glue, nails, screwdrivers, etc, could all scare off the mom and starve the babies*.   But clearly I couldn't let a nest filled with hatchlings plummet off a beam.  So I rigged up a squeeze clamp, by gluing boards to the clamp paddles which are long enough that when, with the clamp clamped to the bottom of the nest beam, the paddles stick up high enough to block the nest from falling, but not so high they block the parents from getting in and out.  Properly armed with the modified squeeze clamp, the Physicist climbed the ladder - one last time- to squeeze it around the beam.   Though installation took only seconds, both parents took off in protest.

I spent the next hour watching to make sure the parents didn't abandon the nest.  If the nest was abandoned, there's a fabulous wildlife center near me that often raises baby birds.  I didn't want to go that route, but.... they appeared to be very incompetent parents.


The clamp around the beam:

The dad sitting in the oak tree singing, and not doing anything useful like, say, feeding his babies. 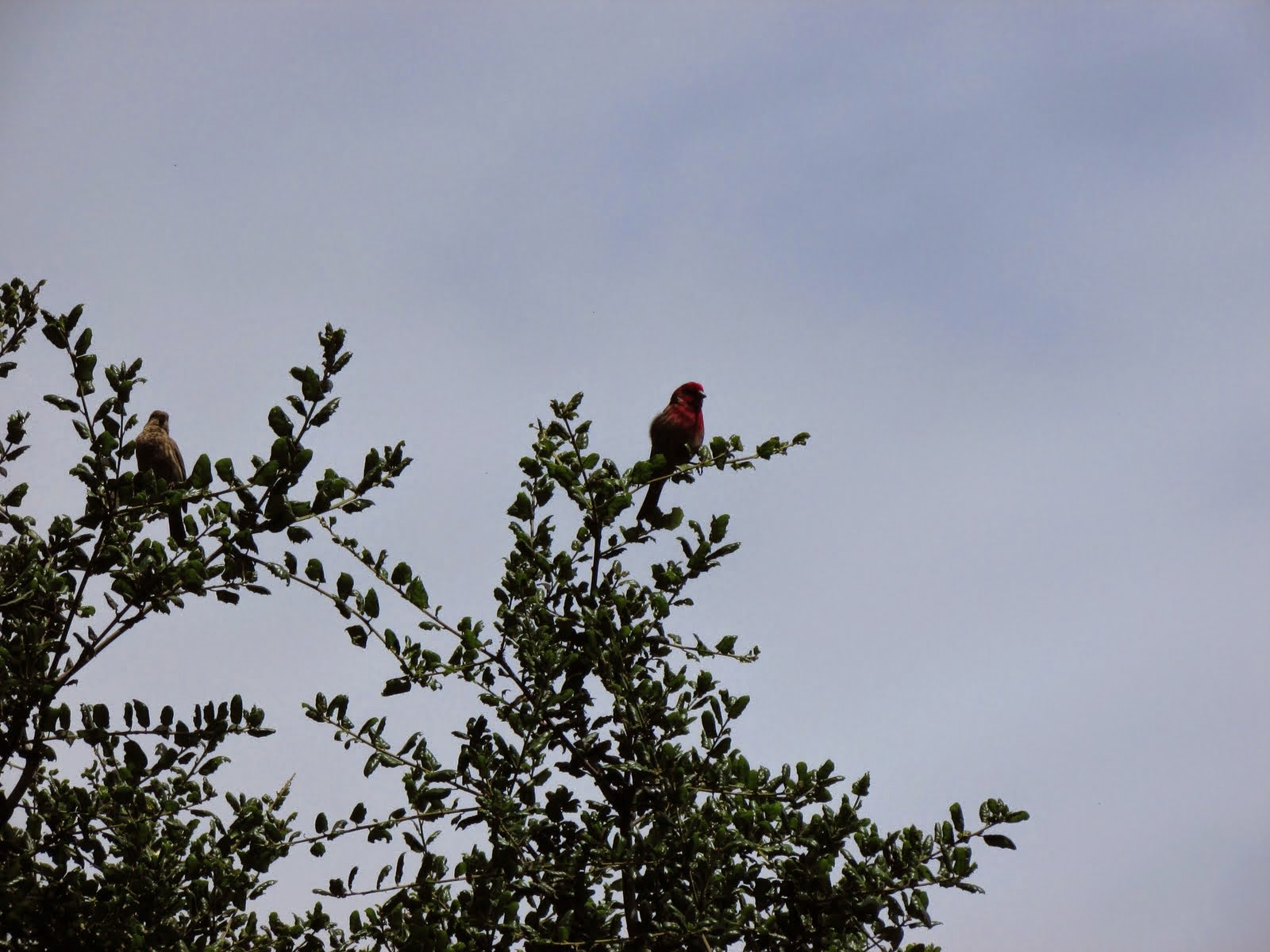 The mom sitting on the roof ridge, and not doing anything useful, like, say, feeding her babies: 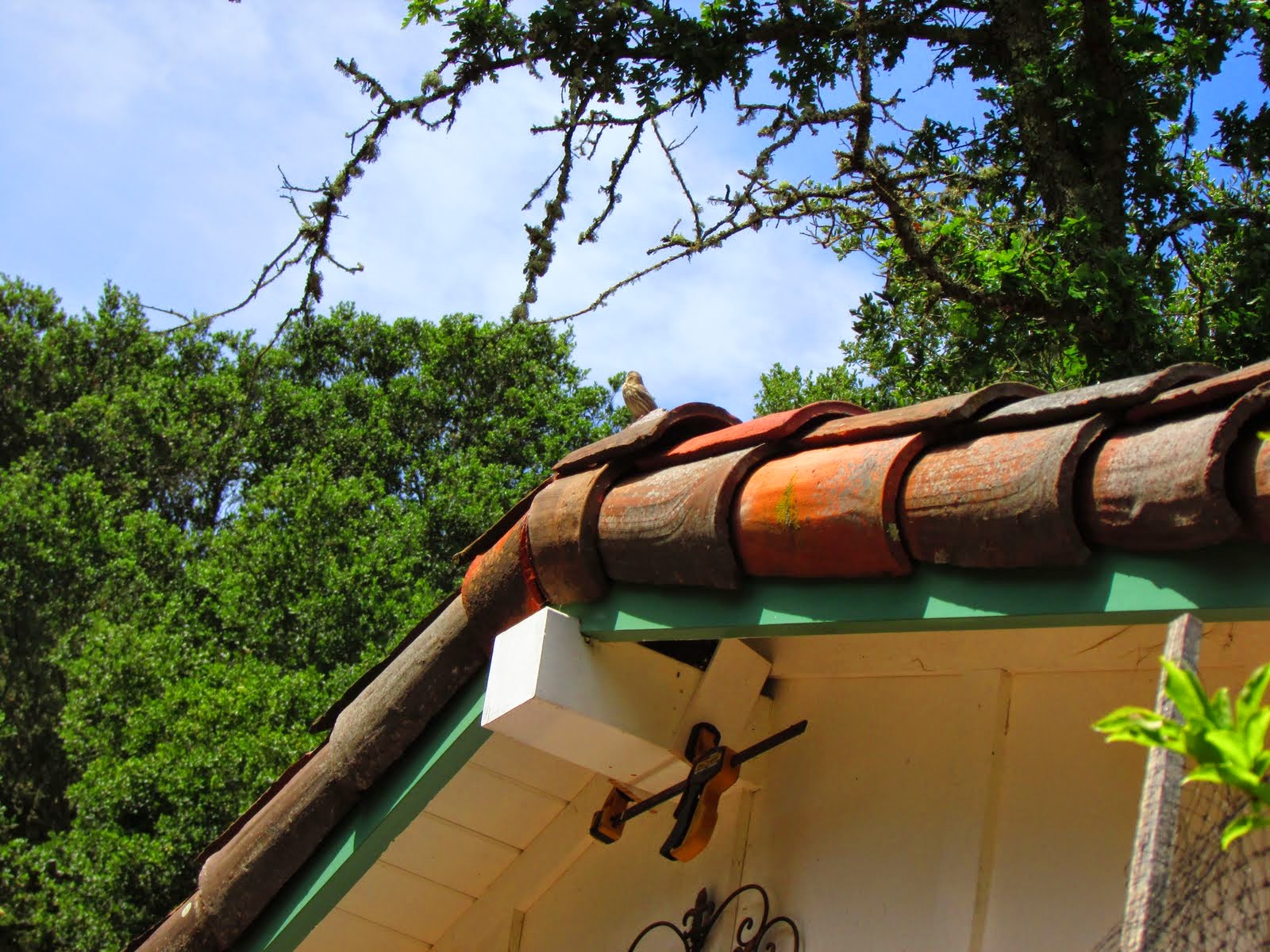 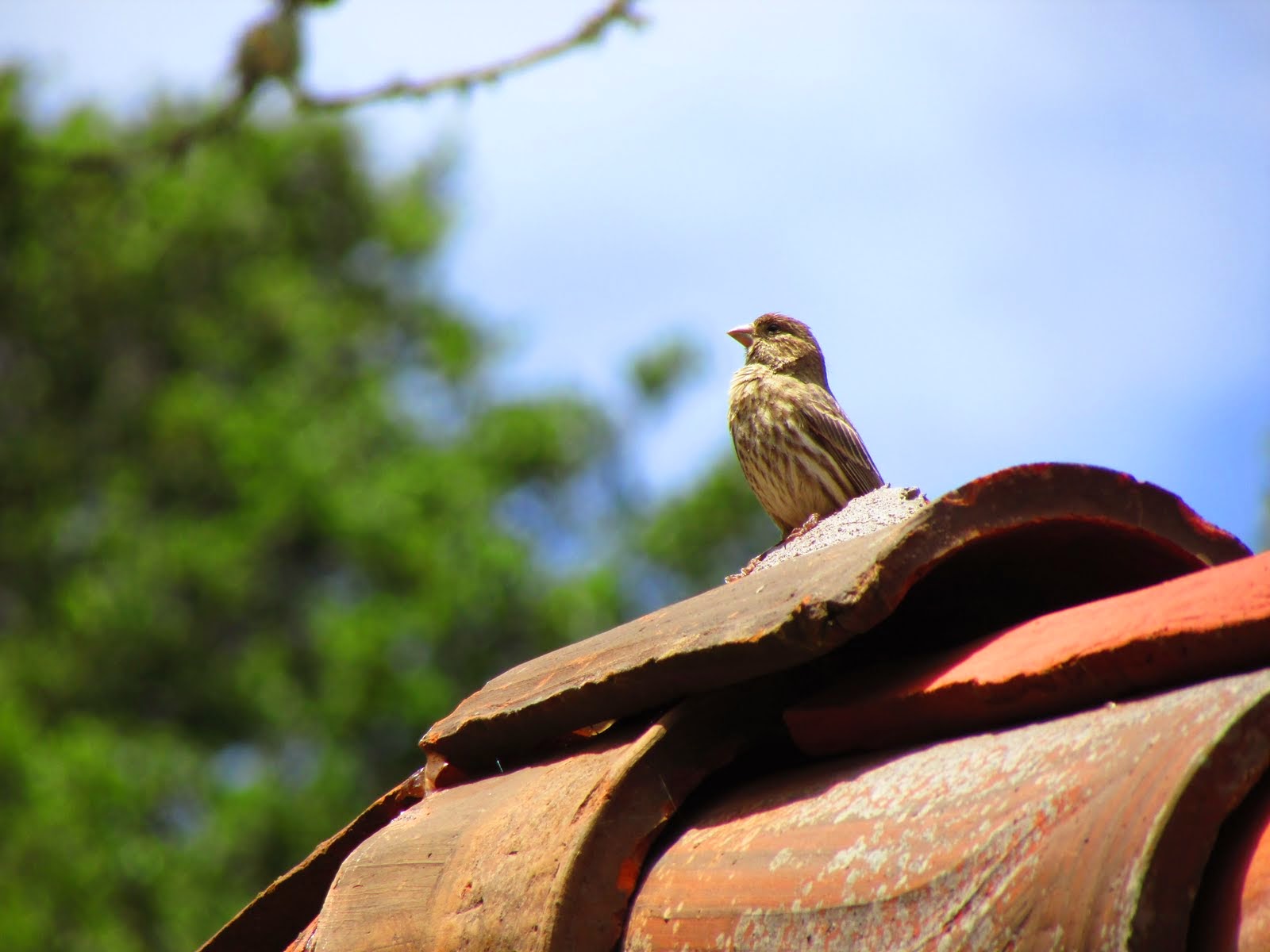 The mom (this made me crazy) SITTING ON THE CLAMP, and still not feeding her babies.  She did this multiple times, just flew in, sat on the clamp, flew away. What is UP, mom?  Are you new? Finally, the dad stepped up. 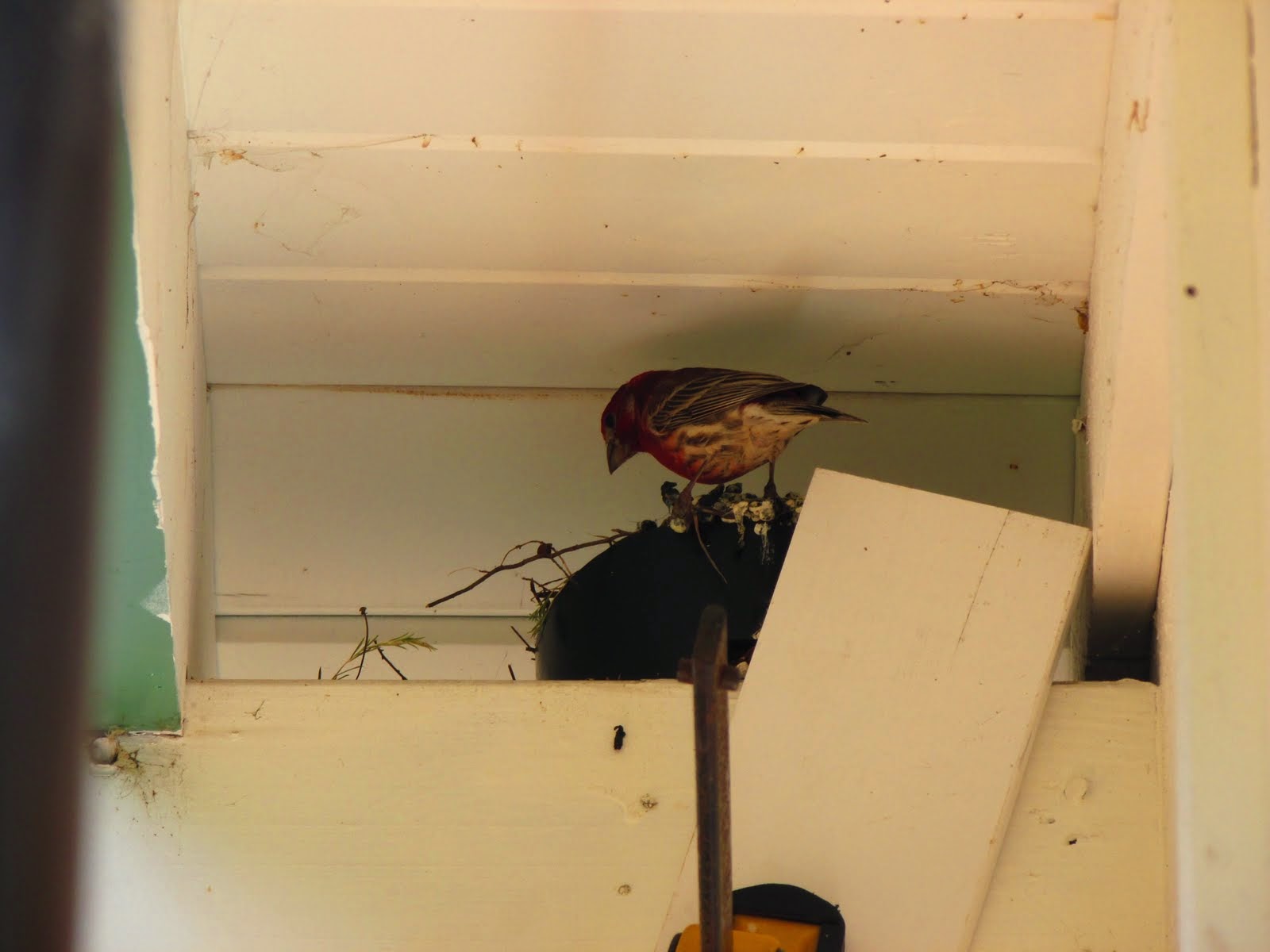 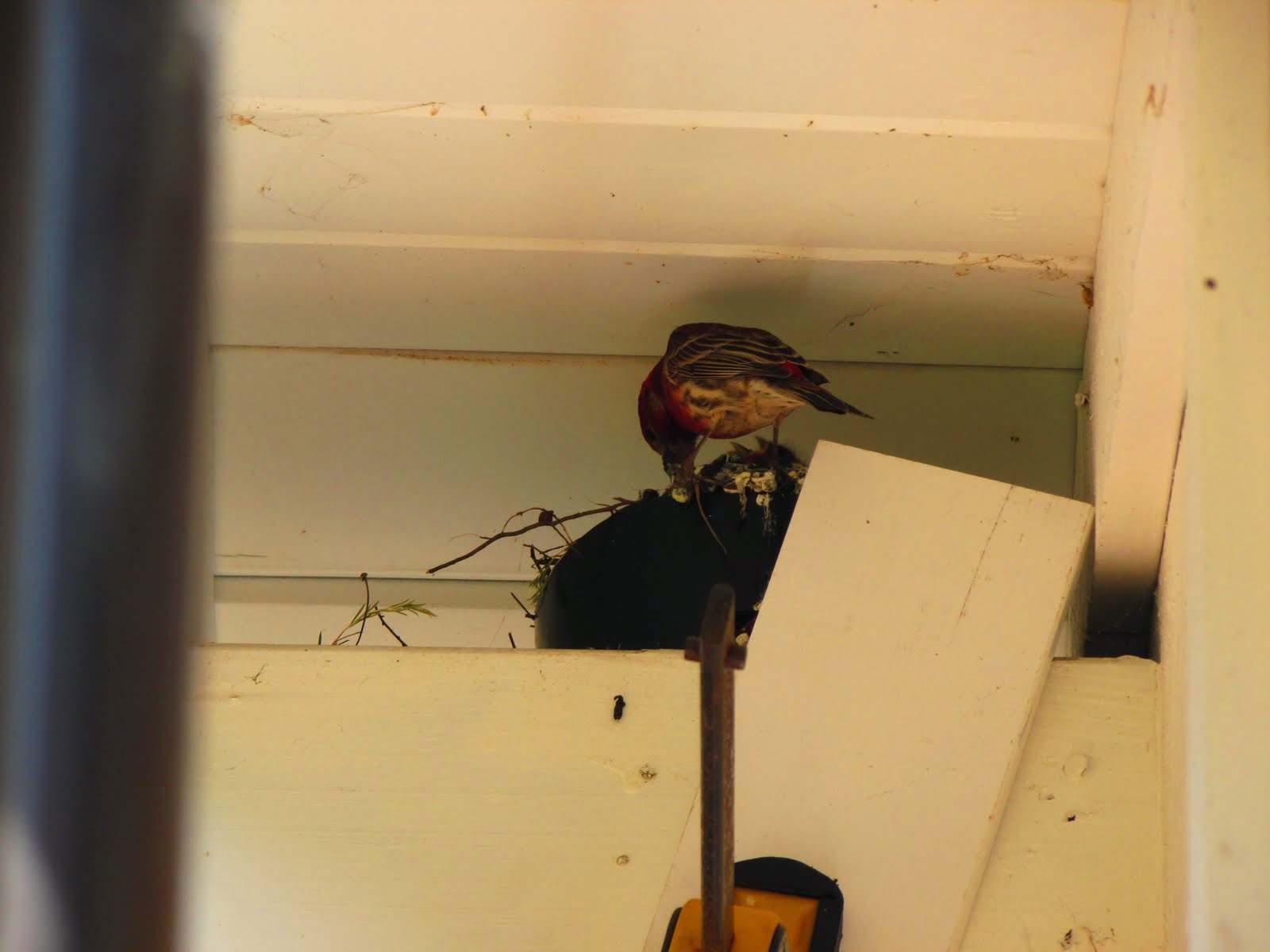 Thank you, you aggravating birds.  You are commanded to safely fledge those darn babies.


*Note: the long held idea that touching baby birds/nests puts human scent on them which will scare off mama birds is a myth.  If you find a lost baby bird, the absolute best thing you can do is find its nest and pop it back in.  However, if you mess too much with a nest, spend too much time making loud noises around it, there's a good possibility of abandonment, depending on the tolerance of the bird to humans, and how annoying/repeated the activity is.  To be a good bird steward, try not to mess with active nests.  Yes, I should have had this talk with my trying-to-be-helpful mom, several weeks ago.
Posted by Rebecca at 8:22 AM