My family and I were meant to spend last week camping in Lassen Volcano National Park.  The plan was to leave Sunday morning and spend the next 6 days climbing volcanoes, swimming in gorgeous alpine lakes, bit o' kayaking, bit of relaxing under the trees.  Saturday night, my husband checked the weather.

"Um, hon?" he called from two rooms over.  "The forecast isn't great in Lassen.  Check your email."

Yes: instead of simply talking, when there is data to relay, sometimes we just email.  From two rooms away.  This is because we are introverts.  It is also mildly tragic.  I'm aware of that.

I checked my email.  This was the weather report for Lassen:
4 helicopters.
38 firetrucks.
700+ firefighters.
Continued lightning storms.

King's Canyon is south of Yosemite, also in the Sierra Nevadas, but down near the southern end of California's Central Valley. As a child, my mother took me every year to camp in the Sierras, but it was nearly always further north, in Mammoth and Yosemite.  I grew up swimming and diving the Tuolomne River, a crystal clear and incomparably beautiful stream, which flows from Yosemite down through Hetch Hetchy and into the taps and showerheads and toilets of San Francisco.  But I don't know the parks or mountains further south, and the rivers I know only by reputation, and their tail ends, the irrigation ditches of California's Great Central Valley.

My office has a lot of projects in the Central Valley.  We do a lot of work on the Valley's water infrastructure, the dams and levees, the highways, the roads and railroads.  Thus, I've written an awful lot of Environmental Impact Reports and Biological Assessments and their ilk, not only on the ecology of the Valley, but on the waterways that flow into it.  Every hydrology section of every ecological report begins in the Sierras, traces its path down through the Central Valley Foothills, and ends in the giant farms and rural towns of the Valley.  I've walked a lot of miles in the Valley, traced a lot of river corridors between fields of crops and orchards.  So it was something of a thrill, after driving four hours south through the Valley, to finally have a chance to work my way up those foothills, and into those mountains.  To see those rivers where they are still wild, where they run over rock and not concrete, between trees and not alfalfa.

In our week in the Sierras, we traced two rivers to their sources: the Kings' River, and the Kaweah.

This is the Valley of the Kings .  It's Kingly, indeed. I was at 6000' when I took this snapshot, and many of those peaks towered thousands of feet above my head. Every drop of rain that lands in that view runs into the King's River, every fallen snowflake, every melting alpine glacier. 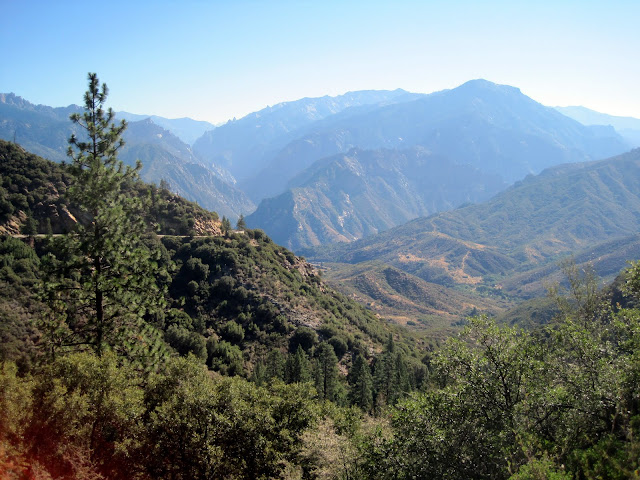 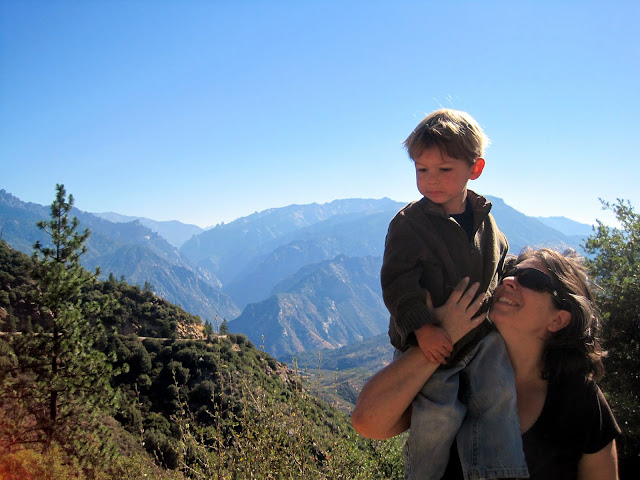 Underground rivers make their way through over 200 caverns like these, slipping through rocks, creating their own mineral sculptures as they pass. 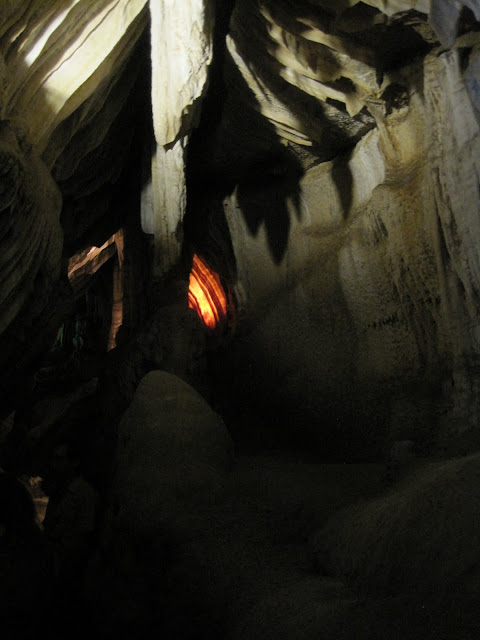 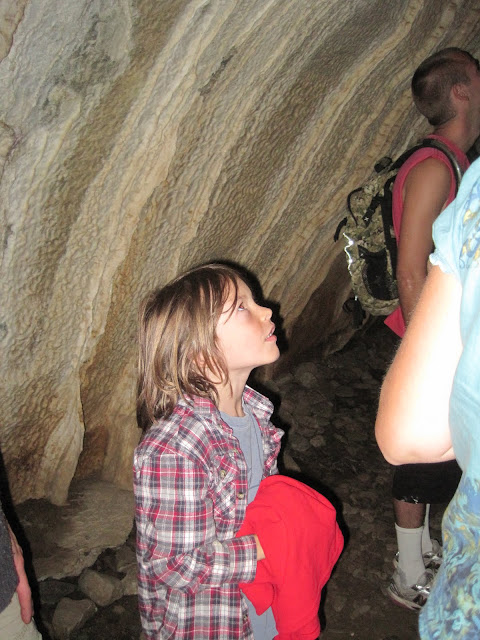 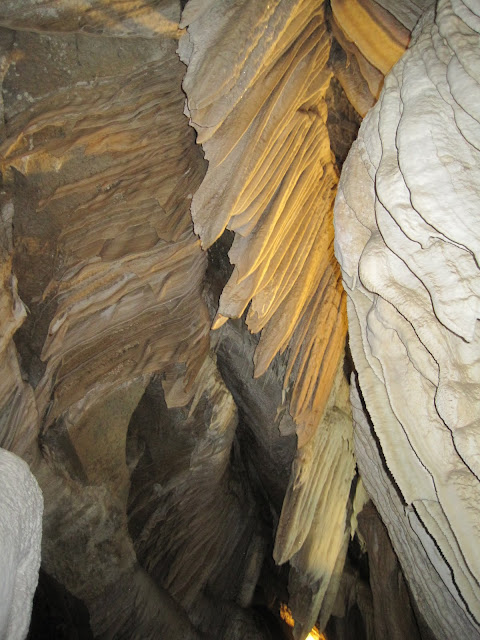 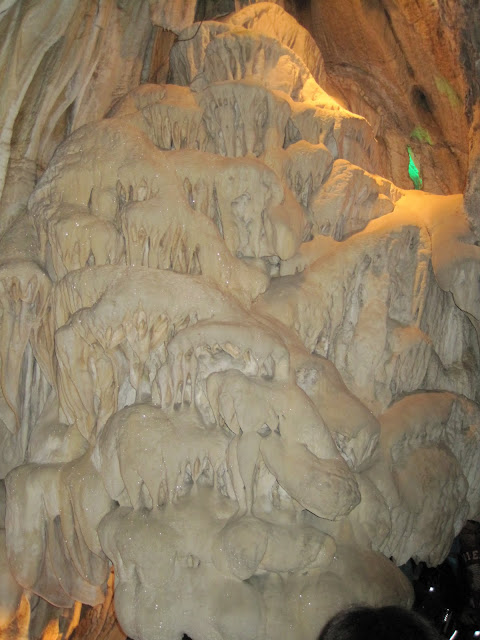 This late in the summer, the snowmelt has gone, and the rains are almost nill.  Huge spring waterfalls fade to soft summer streams. 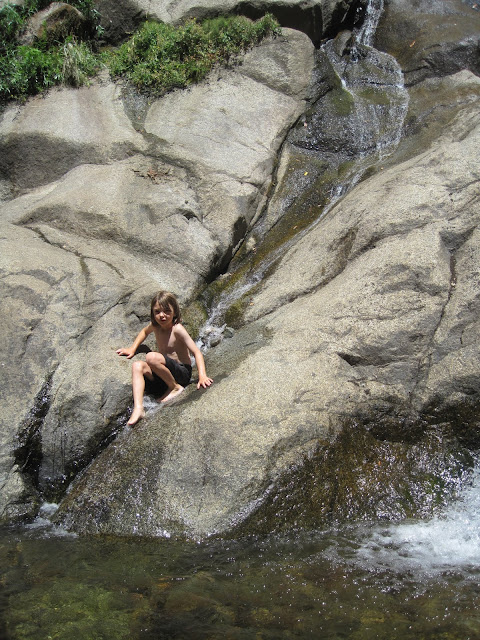 And in their passage, at the base of granite peaks, they leave soft green hanging meadows, filled with flowers.  Black bear and deer browse in these meadows. Muskrats, badger, rabbits, chipmunks and ground squirrels den here. They are prime hunting grounds for bobcat and mountain lion. 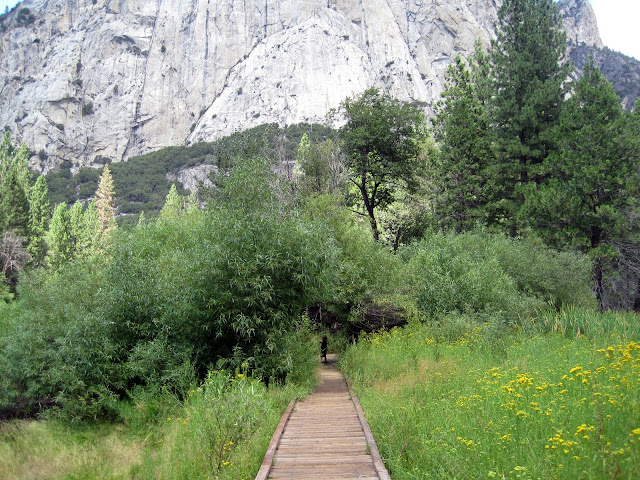 And every stream, waterfall, wetland and meadow drains here, to the Rio de los Santos Reyes.  River of the Holy Kings. 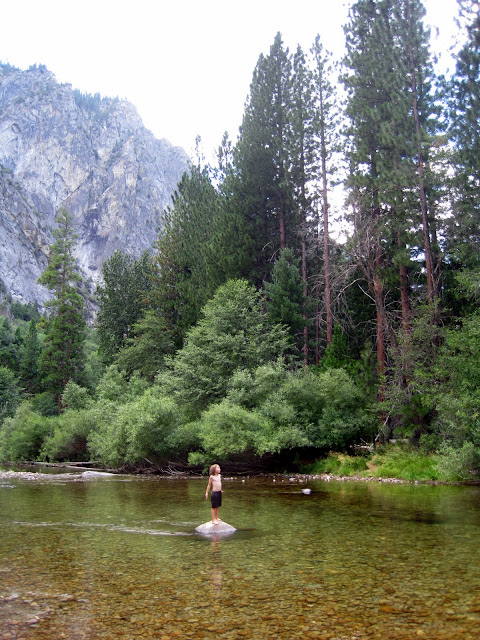 And above it, these: 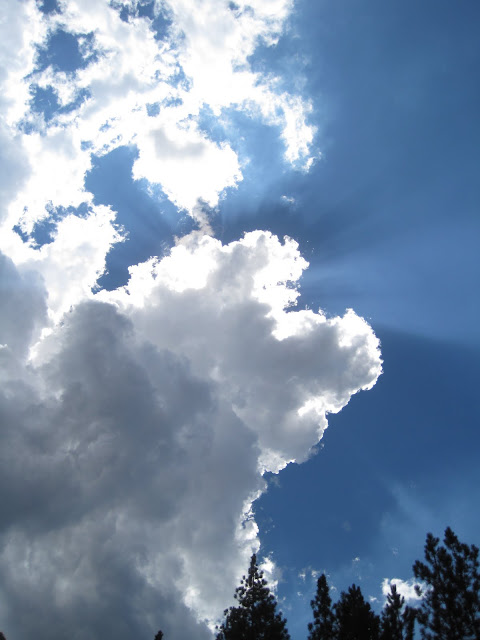 The Kaweah River was just as beautiful: 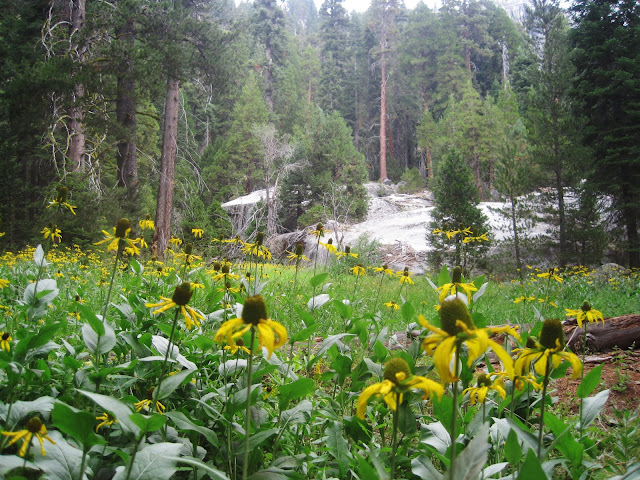 On the Topokah Falls trail we were lucky enough to bump into (very nearly literally) a juvenile black bear.  7 year old and I were jog-hiking up the trail, when we came round a bend where a log crossed the path.  Just as my eyes processed a large black shape and brown face coming straight down the path towards us on the far side of the log, I heard a ranger shout a warning.

"I hear you!" I called back, as I grabbed my son's hand and jerked him off the path.  We were still a good 50 feet from the bear, and he turned off too, at the sight of us, clearly not wanting to run head-first into a human towing a man-cub. Perhaps my husband coming up behind with a smaller man-cub in his arms was an extra incentive to turn.

I was not (see previous mention of horrible wildlife photography skills) quick enough to get an actual in focus picture, but I swear to you on my honour that the furry black thing in the following photo is an actual, live, juvenile bear, and not Bigfoot.  He's young, a year and half, says the ranger, a few months out of maternal protection.  Already brawling with someone bigger than himself, according to a gash on one leg. 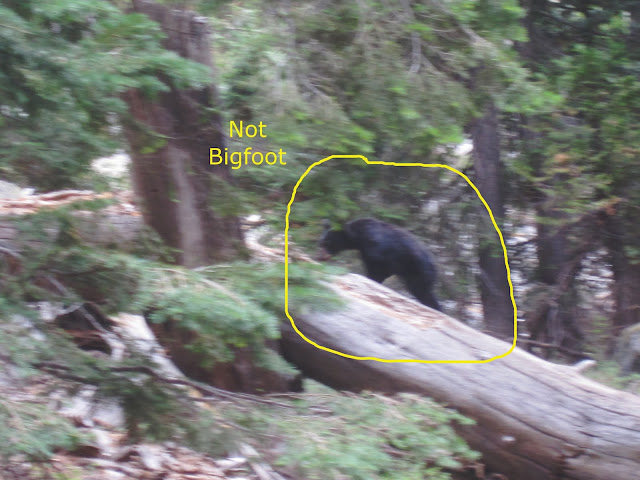 When it was first discovered by Europeans, in 1805, and for thousands of years before that, the Kings' River flowed down from the high Sierras, through rolling foothills roamed by coyote, wolves, and grizzly bear.  And, as did the Kaweah River, it ended in Tulare Lake, the largest freshwater lake west of the Mississippi.  Tulare was larger than any lake in the US except Lake Michigan.  In wet years, Tulare overflowed into the giant San Joaquin River, taking the King's Canyon water hundreds of miles north, all the way to the Delta, through San Francisco Bay, and eventually to the sea.

The California Grizzly is extinct.  Only one wild wolf has set foot in the state in the past 50 years.  He wandered two weeks, found none of his kind, and quietly turned tail and left.

Within 90 years of it's discovery by European men, Tulare Lake had been sucked dry.  Today, the second largest lake in the continent is a memory, and the waters of the River of the Holy Kings flow freely only about 50 miles, to the Pine Flat Dam.  From there, it is drained into culverts, ditches, irrigation pipes. The Kaweah suffers a nearly identical fate.  We passed those culverts on our homeward journey, a half day's train ride, 400 miles of crops and rangeland. 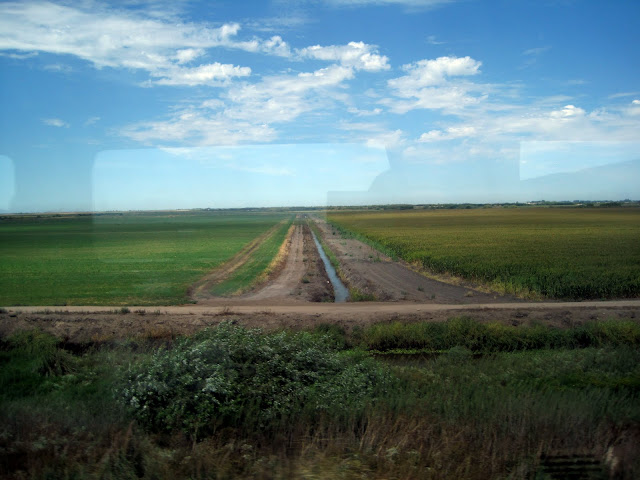 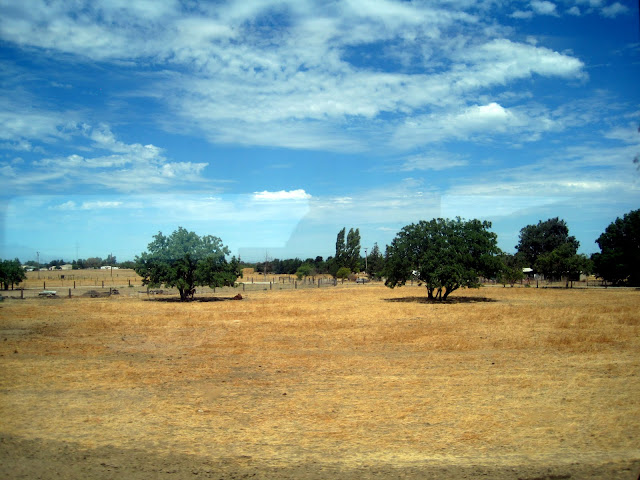 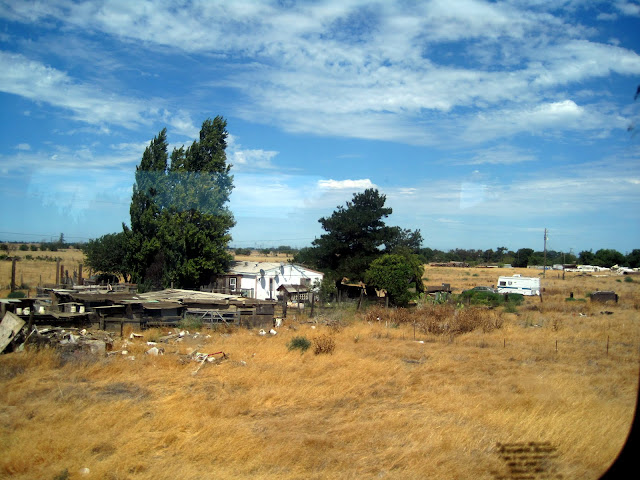 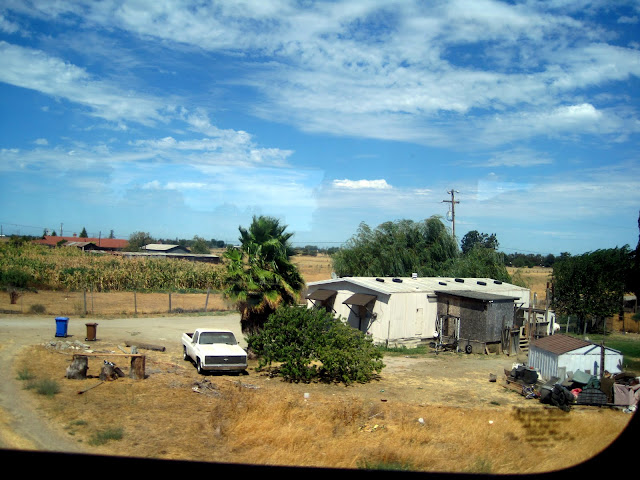 The Delta where the waters used to flow:

Quite a journey, from the headwaters to the sea.  It was an amazing week.