The quick and the dead

I've been stepping over my sons' toys on the playroom floor for three days.  Ok, longer than that.

I'm pretty lax about the state of the playroom, frankly.  I recently acquired a book of "Don'ts for Mothers" from 1878.  It is full of words of wisdom, such as

"Don't restrain your child from romping in the nursery.  It is his castle and he should be Lord Paramount therein."

See?  It is ok to be lax about toys on the floor in the nursery.    However, the same source tells me "Don't let your child sit with his back to the fire: it weakens the whole frame and causes the spine to become bent... and predisposes him to catch cold."  Huh.

Anyway, 1878 or no 1878 wisdom, I've been stepping over the toys on the floor in the playroom.  One of them is a lump of dried playdoh.  The boys were playing with playdoh on Saturday, so it's not surprising.  But this lump looked slightly gruesome - lumps of dried play doh are remarkably like dessicated frogs, really.    I've avoided looking closely at it each time I've walked by.

Why is there a dessicated frog in my playroom?  Did a kid catch it live and bring it in?  Seems unlikely, as they would have instantly alerted me with shrieks of joy and plans to keep it.  Brought it by an ill-meaning cat?  Did it hop in to the cool of the house on its own, on a hot August day, and just...dry out?


There's a lot of pathos in a dried frog, but there's ick factor, too.  I must admit that after a moment of silence (aghast, rather than memorial), I quickly dropped it out the nearest window.  The same one the caterpillar left through.  It can find it's long home amongst the shrubs and flowers down below.  More appropriate than on my rug, no?

I wouldn't stand under that window, if I were you, should you ever come to visit.  Who knows what will land on your head.

Having laid out the frog in not very ceremonial style, I required tea.  This is my British blood calling.  We require tea when we are upset.  Or happy.  Or relaxed.  Or tense.  Or when we unceremoniously bolt dry frogs out the window.  And getting tea, I was frightened right of my skull by a loud "SHEEP", bellowed at me as I approached the tap.

One doesn't expect to have sheep bellowed at one when making tea, and it took me a minute to orient on the bellower.  See how you do. 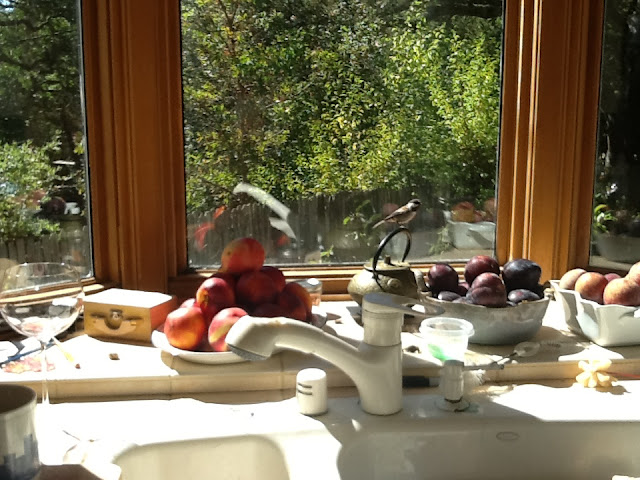 There's a chickadee on my teapot.

A very live, loud, undessicated chickadee.  We had a bit of an argument, Chickadee and me.  I explained that my kitchen window was not an appropriate place for small birds, and it explained that if I didn't like the idea, or the idea of it sitting on my teapot, it meant the blender, or no, my kitchen knives, or better yet, the plums, or rather, the teapot after all, I could jolly well open a window for it.

There's a trick to getting live birds out of your house.  What you have to do, you see, is get a lightweight cloth, like a dishtowel, and drop it gently over their heads, whereupon one can easily and gently pick them up and bring them out of doors.

Chickadee hadn't taken that training course.  It did not condescend to dishtowels.  Instead we played a nice game of tag, or make-Rebecca -climb-the-counters/rearrange the chairs/leap from on high, until he was bored with that game, and pobbled out the kitchen door, happy as... well, as a Chickadee can be, who's clearly won that round.
Posted by Rebecca at 11:26 AM