Last week, I was going to write about the Wildlife Festival, but I got sidetracked by Wonder Woman.


(I liked this kid.  We both had an arm in a sling and didn't let that stop us. We were kindred spirits.  I bet he fell out of an armored personnel carrier, too.  He had that level of cool.)

I heard from about 136 kids that the whole thing was fantastic, and that they got to hang with eagles (etc) as well as frogs, and there was a bunch of great music and a bunch of great games and crafts and everybody won honeysticks from the bee guy.  Also there was cake.  A big giant birthday cake for everybody.

Because I was hanging with the kids and the frogs over in the kids and frogs station.  Damn frogs.  They make a girl popular, and popular girls don't have time for cake.

I never knew that before.

If I think about it enough, it will probably really transform my memories of jr. high school, don't you think?

So I was going to skip writing about the whole Wildlife Festival thing in general, because, in that way that things happen which convinces you beyond reasonable doubt that the universe just  mocks us continuously,  this past weekend was way wildlifier, from my perspective, than the frogs-and-turtles-booth at the festival.

Yes, wildlifier is a word.  I made it myself.  And the last few days: wildlifey.  What I would do, if I was a good blogger, is show you really awesome photographs of the deer, and the fox, and the rare snakes, and the rare birds, that showed up in my backyard this weekend, just so you can understand for yourself how much the universe enjoys mocking me.  I spent two solid months looking for wildlife to show at a festival, and you want to know how many cool species showed up  in my yard the weekend after it was over?  Ten.

But I'm not a good blogger, because this is the best photograph I managed to take of the gorgeous young stag, antlers still in velvet, browsing blackberry behind the house:


Yeah. You've seen better photographs of Bigfoot.  This is not my forte.

So I call up my friend Ivan.  Ivan is the hands-down best wildlife photographer I've ever known. Or fired, which I do frequently because it calms him when he gets overworked. AND, bonus for all of my 6 readers, he has all the photographs of the cedar waxwings, orange-bellied ring-neck snakes, red tail hawks, and red foxes that your little hearts could desire.  AND, he was bugging me just last week about when he'd get a mention in my blog.  But has Ivan sent me any photographs yet?

No he has not.  Ivan, love, you're totally fired.

The closest I got was a photo of wildlife watchers, which frankly?  Not as pretty.


You want to see my best wildlife photo of the last month?  And by best I mean actually in focus despite terrible lighting and framing?

That's a sharp-tail snake I found in the five minutes I got to sneak away from the frogs-and-turtles at the festival.  I snuck away to see if there was still a newt under a log by the pond, and instead, I found this absolutely beautiful girl, curled up in the sun.  So I called my buddy Matt, who you now understand is the guy with the turtle, because he is the best snake catcher I had around.  Also, I shy away from getting bit, even if by very very very small teeth.

Always have a turtle guy around if you happen to need to catch a snake without getting bit.  They're convenient.

So Matt comes over, and holy shmokes, for a big guy, he can move quick.  I think I will rename him.

The Guy with the Turtle and Hands Like Lightning.

So for the rest of the afternoon

HOLY SHMUTZ POTATOES!  There is a CATERPILLAR on my COUCH.  Right freaking next to me.

Hold on.  I will show you. I will photograph him before he attacks.

This caterpillar things is out of control.  You know where I found a caterpillar yesterday?  Hanging from a thread (these puppies have webs like spiders) from the ceiling of my car.  Driver's side.  Right where my head goes.
You know where else? Also yesterday?  Under my bed.  I went to pick up a toy some wretched kid had left there, and it was crawling with a caterpillar.  I threw them both out the window. Not the kid. The toy bounced.  I didn't check on the caterpillar.

Listen.  I like living with oak trees.  They are pretty and the acorns are scenic in that cute little we-can-make-garden-gnomes-out-of-these-or-peg-them-at-people way.  They provide excellent shade on hot summer days and probably do something to alleviate global warming.  But I do not like oak-caterpillar-season, and I do not think that I should be forced to dodge disgusting creepy things with too many legs and attack-faces in my car and under my bed and on my couch when I am trying to write about  cute things like snakes.

Here he is.  He totally has attack face on.  I took this, and then I threw him out the window, too.  I had to use some paper because the couch would not have fit.  Also, my husband might have questioned the couch/window decision. Take that, you galaxy-invading-squish monster!


Ahem.  Before we were interrupted by a foul blot of wriggling inhumanity (and by the way, the babies of every other species in the world are adorable.  Except for baby insects. Who are vile. What is up with that, Mother Nature?  Don't you think the butterfly population of the world would be doing a bit better if you'd bothered to make their babies look like tiny little kittens?  That might have been the way to go, hmmm?) 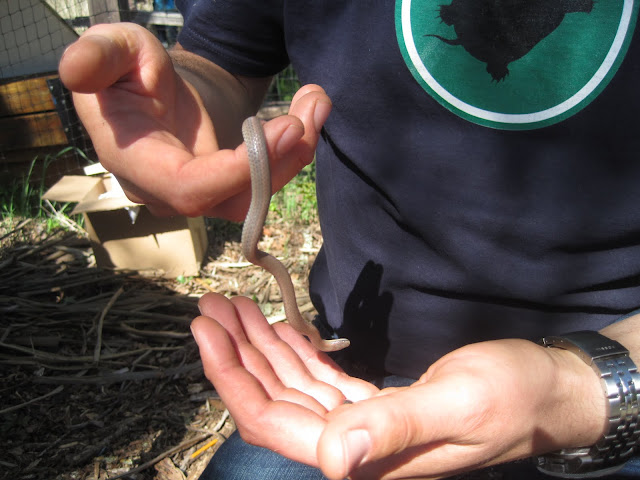 I can tell you this, though.  The kids were thrilled with her.  They and Guy with Hands Like Lightning passed her back and forth for the next hour.  She didn't mind at all, though.

Because she was dead.  We discovered this about 30 seconds after her lightning fast, super-stealth, would-otherwise-have-been-truly-impressive capture.  And yes, that means my best wildlife photo of the month was of a dead snake.

But the kids. Apparently they're totally thrilled with passing around (and cuddling! cuddling! for reals!) a dead snake.  Which really, is completely disgusting.