I was at the Wildlife Festival today, getting set up, and my colleague, Matt, who we will later call "The guy with the turtle" and I are putting up posters.

"So I fell out of an armored personnel carrier yesterday," I begin, to explain why I'm working one handed.
Matt stops me.  "I don't think I've ever been able to start a conversation with that exact phrase" he comments.

This Week in the Garden

Three weeks in the garden, actually.

It's been rather an unusual month, here at Terrace House.  Last we examined the garden, we were just breaking out from the dead of winter into early spring, but a spring following a dry, drought-ridden winter.  Than in three extraordinary weeks, we went from something like 10% of normal precipitation, year-to-date, to over 75% of normal.  That's a good 65% of the an annual year's rainfall over the course of three very short weeks. 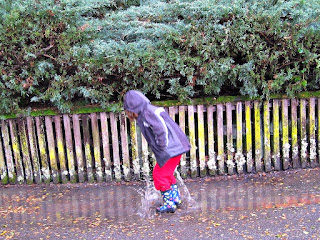 Last night, I climbed in bed early, to cuddle my smallest who had been woken, time and again, by great crashes of thunder.  He had had quite enough thunder, in his opinion. It was one of those black-as-tar nights, except when the windows lit up, every 10 minutes or so, with cracks of huge white light.  Like the gods were playing on/off with a giant celestial light switch.

I could hear the rain thrumming against the house, and pouring through the rainspouts, but more than that, I could hear water rushing past the house, surrounding us in all directions. Down the steps, down the drive, in the gullies and the ravine. It sounded like we were on an island in the middle of a raging torrent - not the most common sound for a California hillside.  My son and I fell asleep to the sound of swollen rivers rushing past.

By morning the storm had moved on, and the world sparkled, damply but unflooded.  So it wasn't until I got a call about the Wildlife festival this afternoon that I realized I needed to think about creeks.

I have a date tomorrow morning at 10 am.  I was meeting two troops worth of Girl Scouts to lead them on a Creek Clean-up.  Girl Scouts are good for local creeks.  We were heading down to this lovely bit of beach downstream of town, which had been thoroughly covered in trash washed down from the commercial district.  Coffee cups, plastic bags, golf balls, detritus of all sorts and sizes.  Perfect for small girls to jump around with gloves on and do good unto their world.

But I did get that call about the Wildlife Festival, and as we chatted pond turtles and mountain lions and tree frogs, my colleague mentioned that the creek would likely be off limits, given how swollen it is.  "But it's fine" I answered, surprised.  "I was there on Tuesday, and it looked beautiful."  "The water district doesn't want us near it, till the swelling goes down," she answered.

One hour, one extremely muddy son, 1/2 a water-filled rainboot from fording a small stream, and one trip to the beach later, I realized she was right.  Overnight, the creek had doubled, and where clear clean water had rushed past mounds of trash scattered amongst willows over a sand bar on Tuesday, now brown foaming mud poured through banks washed clean and willows submerged.  The litter has moved on, and the Girl Scouts will have the morning off.

Now if only my sons could be convinced to let me sleep in.

Posted by Rebecca at 5:45 PM No comments:

Ok, back up.  You have no idea what I'm talking about.

Two weeks from now, on April 22, the Nature Area in my town will be hosting a Wildlife Festival.  The Nature Area is 13 acres of beautiful habitat with multiple creeks, 400 year old heritage oaks, frog ponds, and wildflowers, painstakingly restored over the last three decades by one dedicated and dauntless woman and her crew of volunteer staff and students.  It's beautiful.  And it's owned by the school district, and adjacent to my kid's school, and it's recently been hammered by budget cuts.  Access and educational programs have been cut way back, and some folks are beginning to talk about development.

I live in a community that's absolutely ensconced in nature.  We're 10 minutes from major urban areas, but our town is nestled in and amongst rolling hills and parklands.  We're a community that loves the natural areas around us, but we've also settled right on top of some of the most delicate and precarious habitats - the creeks.  We've built in the drainages to save our views of our hills, but those drainages are what keep the hills healthy and alive and packed with wildlife.  By choking them, we're choking off the habitat and the animals we chose to live amongst.  And within the limits of our town, the Nature Area provides the absolute best, healthiest, most vibrant parcel of creekside habitat around.  It is the town's last refuge of the California red-legged frog.  It is alive with bird song.  Unlike the majority of town, the creek waters in the Nature Area run clear and unchoked by trash, English Ivy, French Broom, and Himalayan blackberry. And it's a safe piece of nature that every kid in the school district has access to, to run around unrestricted, to learn about science and ecology and growing things, and Native American culture.  It's a treasure.  But it's a threatened treasure.

The Festival has been going on longer than I've been around, and is apparently going to be choc-a-bloc full of things like a live raptor show, and honeybee demonstrations, and live music, and making your own nature inspired arts and crafts.

I volunteered (because nobody shot me down in time) to organize a Creek Wildlife Scavenger Hunt.   Where kids follow clues down the trail past the creeks, meeting and learning about different wildlife as they go, with hands on activities, crafts, and games.

First on my recruitment roster: my good friend and fellow wildlife biologist, Matt.  Matt has a passion for reptiles, and for pond turtles in particular, and he's the very fond owner of a rescued, unreleasable, Western pond turtle*.  Matt will be bringing Speckles to meet the kids as Station 1 at my scavenger hunt, and for a hands-on activity, he and the kids will be making Turtle Soup.**

Second on my recruitment roster:  Jon, a biologist who works for the local water agency, which coincidentally owns the creeks running through the Nature Area.  Jon is both good-natured and completely awesome, and came up with the brilliant idea of letting kids use his equipment to identify (and them make their own) animal tracks by the creek.  Possums, raccoons, deer, who knows what else.

We're going to have stations with live native tree frogs to examine,  and bottled invasive bullfrogs (evil ever-hungry destroyers of all native amphibians).  And stations with good creek plants and bad creek plants.  But what I really needed, as of yesterday, was 1)Mountain Lions, 2) fish, and 3) birds.

So I wrote to Doc Hale, legendary mountain lion biologist.  And now we have come back to the beginning of this post!

I met Doc in January of this year, thanks to Matt-of-the-turtles and his hiking propensity.  Matt showed up at work one Monday with photographs of some scratch marks in the dirt on a hiking trail.  He passed them around to half a dozen wildlife biologists, asking "what made these scratches?"  "Mountain lion" said the first.  "Mountain lion" said the second.  "Mountain lion" said the third, fourth, fifth and sixth.  But Matt, being a scientist, was skeptical.  He called up the best known mountain lion specialist in nine counties, and invited him out for a hike to look at the tracks.  I tagged along with my oldest kid and his buddy, because what six year old doesn't want to track enormously powerful pussycats with daggerlike teeth who can run like cheetahs and jump like kangaroos?

Here's Doc, examining the trail marks (click to make it bigger and examine them yourself):

Doc, as you can guess, is a character. Not only does he know his wildlife, but he's a trained archeologist and can identify the Native American uses for every herb we passed on the trail. He's been tracking lions for decades, and is on a first name basis with many of the long term feline residents of our towns.  His photographs are astonishing***, as are his estimates of how many of these enormous, but secretive lions live right in our collective backyards. Dozens of them use the creeks in our local towns as their trails, slipping through silently in darkness, moving from one open parkland to another, leaving no evidence but grainy night photos on trail cameras and an occasional scratch mark on a tree.  And Doc has graciously agreed to come help out, sharing his photos, and his astonishing tales, with the kids at the Wildlife Festival!  WWHHHHEEEeeeeeeeeeeee!!

This is going to be awesome.


*These lovely shelled beasties have been suckerpunched by habitat loss and by competition from released pets, such as the red-eared slider, and are currently a State Species of Special Concern - which basically means they're working their way on to the endangered species list.

**Ok, not really.  Because Speckles wouldn't taste very good.  Early settlers in California got very excited about all the pond turtles here, because turtle soup was a huge delicacy, but to their enormous dismay, it turns out that pond turtles taste like mud.  And not very tasty mud at that.  More like slimy green mud at the edges of a cow-trampled puddle on a muggy summer's day.  Remind me to tell you about the oysters, sometime, though.

***Lion eating a deer on the front lawn of a house in a nice residential neighborhood 10 minutes from here.  Night shot of more than half a dozen lions hanging out like campers at rest time in clearing in the woods.  Deer hunter proudly kneeling next to a newly killed stag, in time honored hunting pose, totally oblivious to the lion who is standing 6 feet behind him, looking on.

When we last saw my farmhouse, Ruben, Chuey, and I had just climbed down off our ladders, after spending two solid days painting stripes.

Then I decided I couldn't live with the stripes.

Then I decided the stripes were Dr. Seussian, and they made me laugh.

Then I decided to completely jump the shark, bought a can of no-VOC, non-toxic, non-caustic paint stripper, and  stripped all the old paint and pickled stain off the wall, so I could hand lacquer and hand wax the entire 12 foot high, 144 square foot room (plus stairwell!!) and restore all the wood panelled walls back to a glowing, brilliant, natural redwood.  Luckily for my marriage, it took an entire $16 can to strip one square foot of wall, and my husband got home before I could do any real damage.  The conversation went like this: