Sundays in the Frog Pond

There's a fabulous nature area in our town.  It's acres and acres of oak woodland and olive trees and has creeks and ponds and a giant willow teepee for playing in and logs to climb and all the sorts of things that a nature area ought to have, if kids are going to run around in it.  It's used by all the schools, and I recently discovered, quite serendipitously, that it has a pond known to host California red-legged frog.

(remind me to upload a photo when I get to work)

CRLFs, as biologists fondly call them, are one of those rare species we get all starry-eyed about.  They used to run rampant across the landscape - indeed, they show up in Mark Twain and also, I suspect, Steinbeck's Cannery Row.  But they've fallen victim to a combination of modern ills - habitat loss and invasive species.  Bullfrogs, for instance, are one of their most voracious predators.  So these gorgeous, colorful, big staples of the California landscape have been reduced to the point where they are now on the US endangered species list as "threatened," which is one level less bad than "endangered."  After endangered, of course, comes extinct.

Since the US government has laws against causing extinctions, threatened species, such as the CRLF, are monitored, and their habitat has certain protections.  And googly-eyed biologists, such as myself, are always up for spending a Sunday making their habitat just a little bit better for them, and, by removing excess vegetation which bullfrogs love and CRLF don't need, we can give them just a little bit more protection.

The Nature Area is run by a fabulous woman who has spent years getting local kids outdoors, and on Sunday she had a group of middle schoolers out at the pond, ready to rake, weed, dig, clean, and otherwise tend to that pond.


Look at these super-awesome kids:  they give up their Sunday, with no more incentive than a thank you and a few snacks, to put in hard physical labor restoring this habitat.

This little lady was hiding under a rock.  Literally. 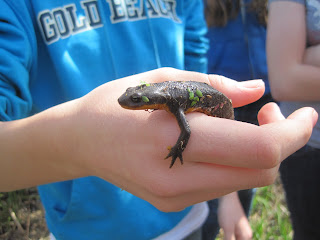 No sign, while we were working, of either bullfrog or CRLF, but we'll be keeping our eyes out for egg masses over the next month or two,