It's raining.  It's been raining for a couple of days, without pause, after a long, dry winter.  I've been watching my garden fill up with puddles, and then rivers.  The fountain has overflowed and taken over the patio.  As I drove up to my house last night, I had to turn on my brights and drive at a crawl to avoid the frogs, who have apparently taken these long-sought rains as a sign to go awandering.

And I'm here in my warm dry house, under the roof we had replaced just last year, snug in my pajamas, and where I'd rather be, tonight, in this rain, is about 40 miles from here. Forty miles from here there is a piece of prairie.  For whatever reason, whatever trick of fate, this prairie, surrounded by bedroom communities and in the midst of agriculture, has remained unploughed for the last 100 years. And tonight, in this rain, it's coming alive.

We believe in what we see, for the most part, don't we?  We believe in other people, and we believe in things like cows, and sheep, because they're big, and when we drive by at 70 miles an hour, there they are, sitting there, picturesque on the landscape, and we moo at them out the window.  Admit it.  You moo at the cows.  And we believe in polar bears - most of us haven't seen them, but they're big and the photos are impressive.  And we believe in whales and dolphins and sea turtles and elephants and eagles.  Charismatic megafauna, is the affectionate - and also derogatory - term that biologists use for those big, handsome animals that nonbiologists most often get charmed by, that the average person walking down the street can generally be counted on to care, at least a bit, about.

I've got nothing against whales and dolphins and polar bears and elephants.  I'm as charmed by them as the next girl.  But what I'm thinking about right now are those creatures that we don't see, the ones we walk right over every day of our lives, never knowing they're there.  And if someone tells us that they're there - well, the first reaction is stark disbelief.  I've never seen them, you might say.  How can they be there if I've never seen them?  You're making it up.

A chap I work with, Matt, was once hired by a housing developer, who wanted to build on a bit of as yet undisturbed grasslands.  It was during the McMansion boom, when new developments were springing up in seemingly every unclaimed piece of grass in California.  This developer felt that way.  He wanted to build his houses and he didn't believe there was an endangered species right in the very field he planned to bulldoze.  He said he would prove they weren't there.  So he hired my friend Matt, who came armed with a very small camera on a very long thread, and Matt threaded that camera into every ground squirrel burrow on the place, one burrow at a time.  Until he found it.  A California tiger salamander.  The endangered species that is hidden right under our feet.

CTS spend nearly their entire adult lives  under ground.  They don't dig their own holes, they cozy up with their neighbors and share the burrows of any small ground dwelling mammal they can find.  The only time they surface is on nights like tonight.  In the rain, in the soaking wet darkness, they make their way up out of the burrows and set off across the grass in search of love in a nice full pond.  And when they've made it to a pond, and mated, and laid their eggs, they'll hightail it back, crossing roads, crawling under bushes, under the hooves of the sheep and cows grazing in their fields, climbing banks, to wherever it is, sometimes more than a mile away, that they feel is the right place to hide out underground, waiting for another rainy season, another year.

The eggs hatch in ponds, where the young live until their gills turn to lungs and they too can make the long and perilous journey overland to just the right underground squirrel oasis. By daylight they're underground.  By the time the rains have dried, they've disappeared.  99.99% of Californians have probably never seen one, though they've likely walked over more than a few.

Tonight the salamanders are walking. 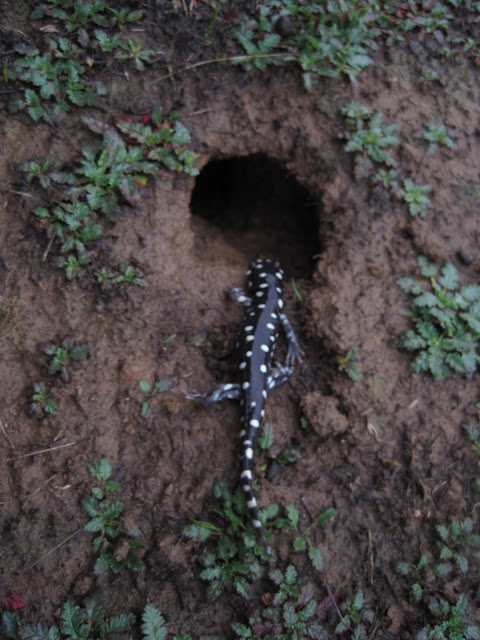