The hidden world in which we live

We haven't met yet, and that's ok.  There's plenty of time.  Unless, of course, one of us gets hit by a bus tomorrow, in which case there's not.  But it's cheerier, isn't it, to go on the assumption that one will have a bit of time to get to know people, as pretty much everyone gets more interesting, the more you get to know them.  That guy who stole my parking space, or the grumpy mail delivery guy who's so ridiculously put out every time I get a parcel and he has to (terrible!) actually get out of his mailtruck/race car and hoof it down the steps to my door.  I'm pretty sure they've both got fascinating lives, if only I knew them better.  The parking space guy might be a concert cellist who plays in Berlin and is one of those fascinating people who spill all sorts of High Art World scandals at the dinner table.  And the grumpy  mail guy who drives his mail truck likes he's training for Nascar?  Maybe he's ... well, ok, I honestly can't find a secret hidden life for the grumpy mail guy.  He's young yet.  I'm sure he'll come up with something, given time.

The point is, here we are, not knowing each other at all.  The basics of me, just to start us off on a stable sort of footing, is that I'm a mom, I live with my husband Nathan, two sons, a cat, and across the patio in her own little house, my mom.  We all moved in together last year, onto a bit of land on a rural hillside near a big city somewhere in California.  We live in an old farmhouse, falling down in bits.  We renovate how and where we can, try to fix up the garden, and between times, work, volunteer, hang out with friends, and drag said sons out of doors as often as possible.  They're usually willing.

When you buy an old farmhouse, you never know what secrets will turn up.  A beautiful hardwood floor under the living room carpet.  Appalling, dark green asbestos-infused 1940s linoleum under most of the other carpets.  It's a crapshoot, and a hodgepodge, and if nothing else, it keeps life interesting.

Living in the country is exactly like that. Hodge podge.  Never know what will turn up next.  I pulled into my driveway yesterday, and it was filled with a flock of wild turkeys. Why?  I don't know. Stopped by for tea?  Just passing through?  Point is, they aren't there, and then suddenly, apparently, one has a driveway filled to the brim with very large, very odd looking fowl.  Nathan went down to the gar - nevermind. See?  It did it again.  I was sitting here typing about hidden things popping up in the garden, about to transition into talking about salamanders via a skunk story, when **clearly** Nature went "Rebecca, dude, lame transition, let me GIVE you one."  Because my husband just walked up - he'd been planting blueberries over by the kitchen - and handed me this: 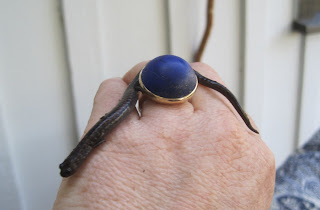 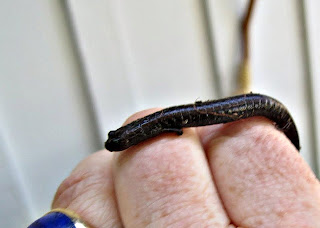 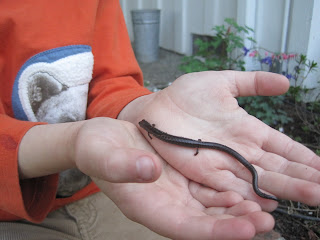 California slender salamander.  This one is tremendously common, but like most salamanders, very rarely seen, even when all around us, because they're freaking brilliant at hiding.  In the 18 months I've lived here, I've only found one other, but I'd estimate there's probably somewhere between dozens to hundreds in the neighborhood.  This one was in a pile of rocks above the driveway, near the puddle of spilled wine which is yet a different and surprising story.  With which submission from Nature (thanks Nature!), I could right here transition to telling you all about the tremendously uncommon California tiger salamanders I was hanging out with last week, and What to do When Caught in a Hurricane with a Salamander, but my kids think I ought to pay attention to them.  Fair enough, for a sunny Saturday afternoon. Also, I want tea. So next time.  Amphibians.  Hidden world.  It's a date. Carry on.
Posted by Rebecca at 4:38 PM