The first time I met a tiger salamander in the wild was on a morning following a night just like this.  A downpour of a rain, steady and hard and long.  My colleagues and I had been offered the opportunity to assist, on a voluntary basis, with a research project studying a population of these entrancing and intriguing creatures.

The researcher, properly trained and permitted, had set up a number of pitfall traps throughout the prairie.  Normally the traps are closed, so nothing can fall in and be injured or killed.  But on the evenings when rain is forecast, he goes out and opens the traps.  Then he sends out his email to his team of volunteers: the traps are open.  We'll meet at 5 am to check them.

Traps must be checked first thing in the morning for two reasons.  First, there are a lot of them, and should we find a salamander, we must measure it, weigh it, photograph it, find a nice squirrel hole for it, and release it.  Should we find a lot of salamanders, as we sometimes do in this bit of protected land, we weigh, measure, photograph and safely release each one, and that takes hours.  So we start early because we never know whether it will take 3 hours or 8.  Second, a salamander in a trap is easy pickings for any predator that wanders by - a hungry bird, or a raccoon.  From dawn onwards, each one is at risk, and it is our job not to let a single one come to harm.  Every trap must be checked, emptied, and closed, every rainy morning.

Two years ago was my first sojourn into salamander trapping.My colleagues and I were driving well before dawn, through a rain that grew harder the longer we drove.  When we arrived at the meeting spot and tried to step out of the car, we found it easier said than done - the wind was howling around us, and it took all our strength to force the car doors open.  We huddled in the parking lot in the sheeting rain, broke into teams with the other volunteers, were given our assignments, and set out.  The wind died down some, and as we moved along the line of traps, the exhilaration of meeting and holding these extraordinary creatures was enough to keep me warm.  But after an hour or so, the already howling wind picked up.  What had been a forceful 40 miles an hour picked up to 50, and possibly 60 mile an hour winds.  If you've ever driven down a highway in hard rain, you know exactly how wet that is.  But we didn't have cars around us, or even umbrellas - which would never have held up to that weather, even if the salamandering hadn't required both hands.  The few trees I could see were bent impossibly over at 90 degrees - and so was I.  To walk into the wind I had to go bent double, using all my strength to force my way forward, my entire body from hips up exactly parallel to the ground.  When I turned my back to the wind I went with leaps and bounds, the wind pushing me forward three steps to every one I tried to take.

Every story I'd ever read as a child about hurricanes was central in my mind.  Jacob Have I Loved, or Captain Courageous - the characters dashing desperately through the storm or lashing themselves to the decks were bent just the way I was bent now.  But we couldn't lash ourselves down, nor dash for shelter.  There were another 60 traps to check.  Who knew how many small, fragile endangered species crouching at the bottom of buckets, with no way out of this storm and sure death but us.

At one point I sunk to my knees in mud and had to be hauled out by a colleague.  By halfway through the morning, the wind had found flaws in Gina's rain pants and torn them to shreds - they fluttered from her waist like long yellow wind socks, and the pants she wore under them were soaked black.  None of us, with rain gear still intact, were much drier. And yet, by the end of the morning, when the last trap was checked, and emptied and closed, and the last salamander safely underground, the four of us found ourselves back in my car.  Dripping.  Shivering.  Starving. and Grinning.  I'm not sure who started laughing first, but it took us 10 minutes before we could stop. And then we high-fived, and drove home.

*****
This year was a dry winter, but there were a few nights of rain, and last month I got to go again.  This time, the morning held only a light drizzle, and no wind.  But it held a lot of these: 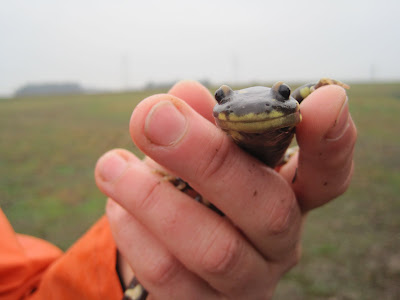 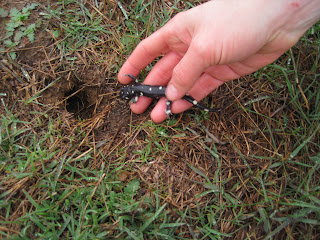 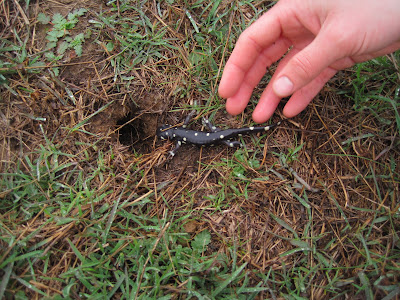 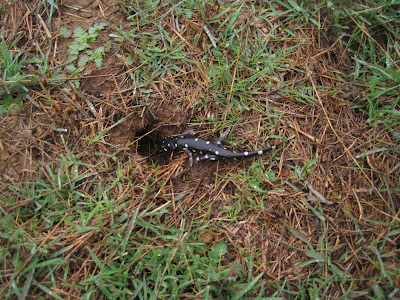 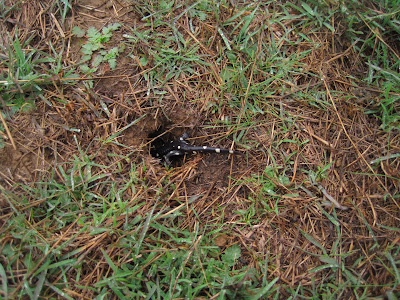 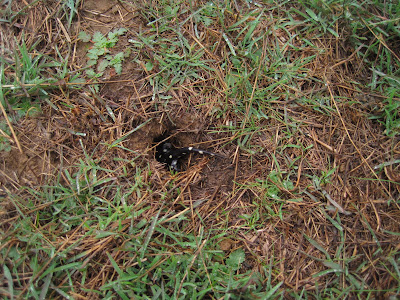 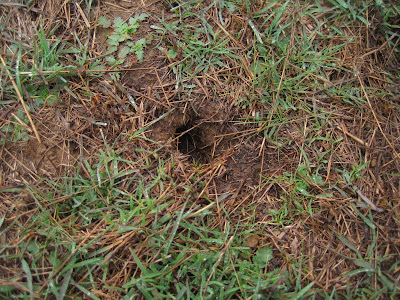 So where are they?  Where can you see one of these charming, tiny spotted creatures for yourself?  Their numbers are dwindling, and their range is shrinking.  But if you've ever hiked across a grassy meadow in northern California, or wandered by a cow field, or past sheep grazing, or visited a new housing development on the edge of wilderness.... you've walked right over them.  They're always there, hidden right under our feet.

And on nights like tonight, in this rain, they're walking.  Get out a flashlight, if you like, and go for a wander.  But be careful where you place your feet.
Posted by Rebecca at 3:42 AM