One of the best parts of my job is the opportunity to get (and sometimes get my kids) up close and personal with some of the enormous variety of wildlife that hide right here in our midst.  California has the luxury of encompassing dozens of different ecosystems from sparse deserts to lush redwood rainforests to rolling, grassy, oak covered hills to the towering Sierras, and many, many more.  And in each new habitat comes a whole host of wildlife species.  Many are struggling hard to survive as humans spread ever farther across the landscape.  Some have gone extinct.  Some may have, we just don't know.  And some, particularly those listed on the state and federal threatened and endangered species lists, we're doing our best to help hang on.

You know how some people feel about meeting a movie star?  Or their senator, a president, the Queen?  All jittery and "it's a honor" and "ohmygosh did you see who I just met? Wow wow wow."

That's pretty much how wildlife biologists (WBs) get about listed species.  Star struck.  Googly eyed.  We compete in the office for the prime assignments that will get us hands-on experience with whoever our favorites happen to be.

Yeah, I think that makes us suckers.  This is how it goes down:

WB#1 email, Monday morning to the whole office:  "Hey, I was hiking last weekend and found a three inch puddle under a bush.  I pushed my face through the thorns to investigate, and sure enough there were spadefoot toad tadpoles.  It's a six hour drive to the puddle, which is near a dirt road in rattlesnake filled dust in the middle of nowhere.  Anyone want to go back Saturday to see it?"

WB#3 email: Nobody ever sees the toads, man, they live underground.

WB#4 email: In my previous job, we had superfancy cameras that could see through the sand, so I totally saw spadefoot toads.  It was magical, man. It was....wow.  Everybody should see these toads.


WB #1 email: Anyway, if anyone wants to see the tadpoles, we're leaving from my house at 2:30 in the morning Saturday.  You'll need to bring hiking gear, and standard issue personal protection equipment for a half hour hike: three day's supply of food and water, a turbo-sized first aid kit, fire extinguisher, sunscreen and a sunhat, rattlesnake gaitors,  a bullet proof vest, and a movie-size box of m&ms.

WB#5: Well Saturday is my sister's wedding and I'm supposed to be Maid of Honor, but she totally won't mind if I miss it for this.

No, I swear.  That's exactly how it goes.  Italics and all.  This is how we bond.  Group field trips to see totally obscure gobs of goo.  A few times a month, we all give up our lunch hour to give each other lectures, and we all show up, totally excited, for an hour on topics that have included how to identify different frog species when they're all still tadpoles.  or eggs.  I'm not sure this is something normal adults do. 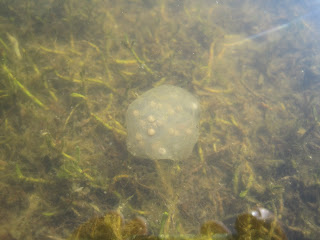 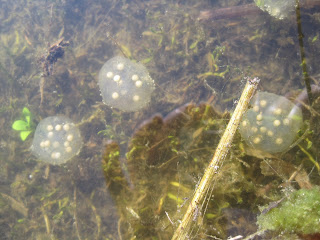 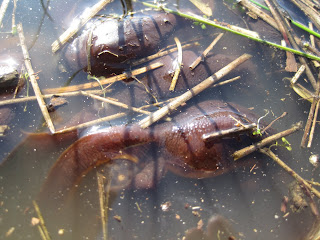 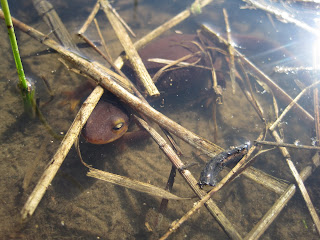 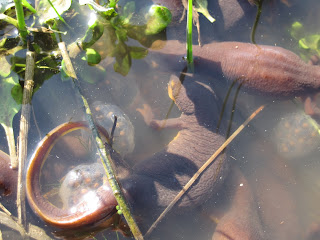 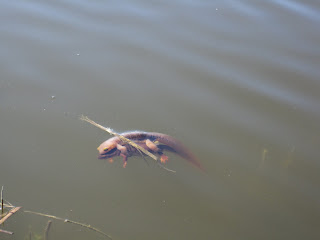 We go nuts for this kind of thing, man.  Wild.  I made my kids hike 45 minutes to get to that pond just to see if the newts were mating just then.


Also, I'm not kidding on the personal protection equipment.  We field biologists are into safety, man. Someday I'll show you my rattlesnake boots.  You can look forward to that: a 19 year old with dreadlocks spent the entire 10 minutes it took to fill  my car in a Sacramento gas station, telling me how hot they were.   Umm, also, in case it needs clarification, he very clearly meant the word in the way 19 year olds mean the word, and not necessarily in the way 40ish year old women in rattlesnake boots on the tail end of a sweaty day of field work mean the word.  It came packaged with the opinion that I needed a bubble bath, candles, and a good man to give me a massage.  'Cause those boots are hot.*

*Yes, I relayed this opinion to Nathan later, but sadly, he just laughed. Opportunity lost.

Do you see how I still haven't gotten to the salamanders, here? (Those blobs up above were newts.  Different creature entirely.) It all hangs on that starstruck googly eyed quality, and yet here I am, not having written about them yet.  But clearly, this post is long enough already.  Onward and upward.  I'm pretty sure Hidden World III will include the darn salamanders.
Posted by Rebecca at 3:43 PM