1. Thank you for indulging me in last post's rant.  I shall try not to do it often.  Be warned, though: I am liable to rant as often as 2x per year, and when I do, I gesticulate with the vim and intensity of a crowd of Italian mothers debating their rival sauces.  One wants to stand at a safe distance.

2. Do you ever have one of those weekend where you go out with all your old college friends and you hit up the G Street bars you used to hit regularly in college, and then somehow someone orders shots and the beer chasers don't really drown the buzz and another few rounds later and another few bars later, you suddenly wake up in your own bed with your mouth tasting fuzzy and the absolute certainty in your mind that whatever you might have done in college, you are clearly too old for that now?  And what on earth were you thinking?


That is exactly how I feel.  Only there was neither friends nor bars, nor sadly, even drinking involved.  Just that delightful wrung out and put away wet feeling of utter inability to move another muscle, even to blink your eyes.  Ho baby, that was a weekend.  And like the alcoholic version above, the only cure - I'm certain of this - is hair of the dog.

I must. keep. painting.

This is how it goes: You walk in my front door.  You're standing in a big, empty room, with a pile of shoes on the floor by the door.  It's one story high at the door behind you, sloping up to 1 1/2 stories directly in front of you.  Straight ahead, through a double door, is the dining room.  To your left is the playroom/den, to your right, a staircase and the door to the living room.  It's physically the central room in the house.  It's the room that's supposed that's supposed to welcome you.  But it's dark, and gloomy, and the wood panelled walls are stained a muddy mushroom brown green grey.  The only lighting is from grimy, brassy can lights on grimy brass tracks.  Some of the bulbs don't work - not because the bulbs have burned out but because the lights are just very far gone.  The ceiling has wood beams in the same muddy mushroom as the walls, and the panels between them might have once been white, but are now stained yellow with age and cracked.  There's one window: a small, octagonal thing next to the door, in the shade of the house, that lets in no direct light.

(I think that if you shift and click on a photo, it will show it to you much larger in a new window) 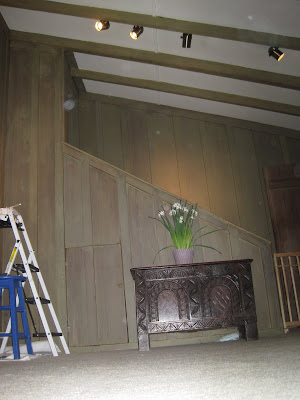 From the moment I bought the house I've been trying to fix this room.  18 months, and the number of paint colors I've tried has long past into double digits.   I went a bright sunny yellow for awhile, but my husband couldn't stand it.  "Mexican restaurant,"  he said, dampingly.  And somehow, even with bright yellow walls, it remained a dark and depressing room. 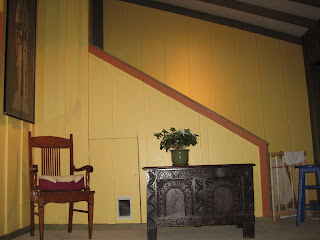 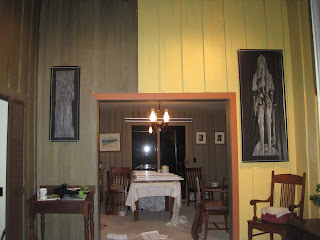 I cut the front door in half to let in more light.  That didn't help. 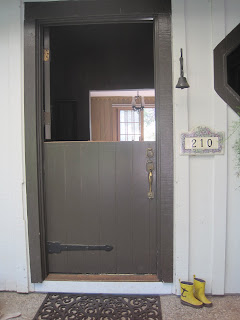 I looked past the entryway and painted the dining room, which had been the same muddy brown, until it glowed and shone.  I took off the door frames and sanded them down to their original redwood and laquered and waxed them till they glowed.


Now the view from the front door was vastly improved - you enter the house and your eye is drawn straight past the entryway and into a bright and welcoming room.  But you were still standing in a dreary, dark, hall.  I primed the walls white - that brightened it a bit, but what color to paint on top?  I tried ice blue, faint blue, light blue, middle blue.  I gave up for six months. 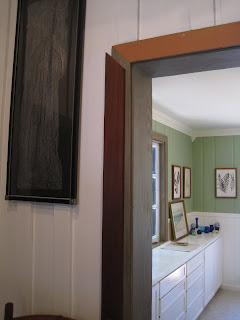 He offered grey.  I rejected grey, absolutely.  He argued that my dining room's green had a lot of grey in it, and as the two rooms are closely ensconced, that grey would mesh well.  I spurned grey, and offered red, in shades of brick or terracotta.  He sneered.  We had already tried and rejected yellow, in a myriad of hues.  He found a slate blue, and in a 6" by 6" square, it looked great.

I painted three of five walls in Victor's slate blue, and despaired again.  It was green blue, it was grey, it was one color here and another there, and over all hung those grimey, horrid, depressing  track lights and cracked ceiling.

For a year I'd been hiding from that ceiling - it was terrifying, daunting, in the amount of labor it represented.  I thought I could ignore it, hide from it, pretend it would go away if I didn't look.  We talked about someday stripping and restoring the redwood beams.  We talked about antique tin tiles.

But Victor's failed blue, if it did nothing else, shook something awake in me.  That room was not going  to remain another month in that condition.  So I stopped consulting Victor, or my husband, and I bought lights, and I called in reinforcements. 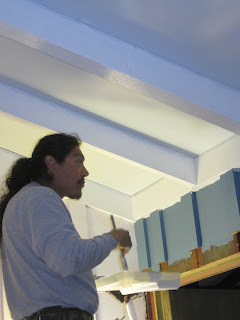 And this is Chuey. 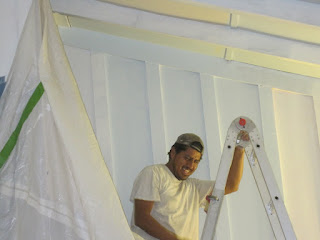 They built my mom's house last year from the ground up, and by god they were going to save my entry.  Yesterday, Ruben and Chuey and I spent the day on ladders.  Today, we sent the kids away and my husband and I spent another day on ladders.

And it is not done.

I walk in now, and the ceiling is bright, and the whole room, even with half finished walls, feels bright.  The new lights, although only two, give more than twice the light of the 8 cans that used to be.

The walls are Victor's slate with stripes of Mozart Blue.  The ceiling rafters are marscapone and the panels are glacier (a super pale blue).  The door frames will be the same refurbished redwood that the dining room doorframes are. Color for the two side walls (behind the staircase and towards the playroom, visible in the pic where I'm painting the ceiling) is yet to be determined.  Something very pale, I think. I'll take suggestions, happily.

Halfway through Saturday, N was out with the kids, and I stopped painting to text him: "Happy happy happy." 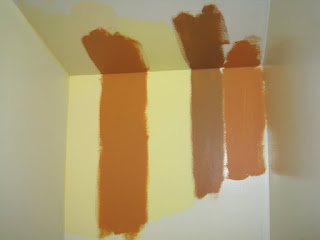 Why yes, old houses are indeed a blast.
Posted by Rebecca at 10:06 PM